GI Joe subsets like Slaughter's Marauders, Tiger Force, and Python Patrol were all ways for Hasbro to save a buck by reusing old molds, but also allowed kids to pick up characters they may have missed if they didn't collect GI Joe from the start. As a kid I was a huge fan of the Marauders and had more from that subset than any of the other teams. Over the weekend I picked up carded samples of Barbecue and Spirit at NJCC.

I remember picking out SM Barbecue at a store called Best when I was a kid. I missed some of the best GI Joes on the first time around because I started collecting figures in 1986. Any of the earlier figures I had were second hand. I didn't have the original Barbecue, but had fun playing with him at my one friend's house. I was excited to have him and all his equipment. His little axe and spray gun are easy to loose. SM Barbecue only had a brief appearance in my stop motion animated show, Action Figure Adventures, but he has the last line in the final episode. This guy looks great hanging with other carded figures in my toy room. 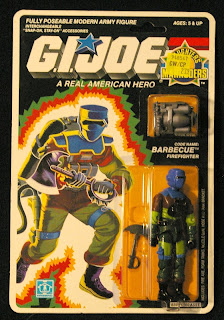 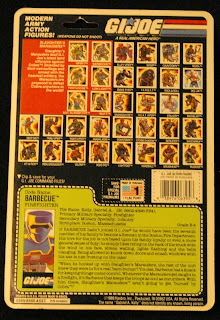 Slaughter's Marauders Spirit was not one of the Marauders I owned as a kid. I passed up on him at first because I had a v1 Spirit that was given to me by a neighborhood kid who out grew his Joes. I wanted to get him eventually, because my bald eagle, Freedom, had broken talons. This subgroup of figures were out of retail before I ever got Spirit. I did not add a SM Spirit figure to my collection until I was in college. Now I also have a nice carded sample of him hanging next to Barbecue. 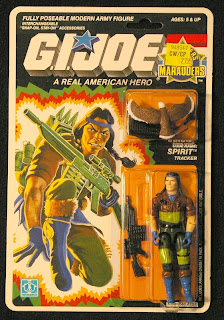 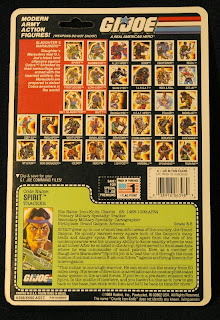