Mechanic was Dr. Scarab's main muscle in the Bionic 6 cartoon. He's a huge hulking man and since the Bionic 6 figures are made out of die-cast metal he's a hefty toy. In the vein of classic architypes, since Mechanic is very large and strong he's also dim witted. His only accessory is his rubbery tool belt. It's made of a flexible orange plastic and has several tools sculpted on it, including a hammer and pliers. In the cartoon he was seen using a nail gun and throwing saw blades for weapons. I bought this figure at NJCC and he looks pretty good. Loose Bionic 6 figures are tricky, the paint chips easily on these metal men and they often time look rough when found in the wild. 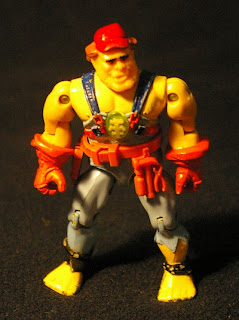 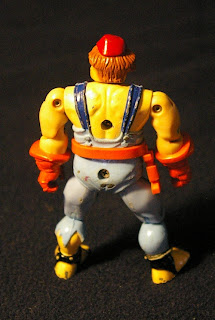 When I was a kid, my mom did in home day care. Meaning that every day four or five kids would get dropped off at our house and my mom would look after them and make lunch and what have you. This meant that there were always a lot of kids around to play with. One of the boys my mom watched for a couple of years seemed to get a new toy every week. His mom would show up to pick him up from our house and she would have bought him a new action figure. Mechanic was the first Bionic 6 toy I ever saw, and this boy brought him to my house so we could play. We pretended that he offered to help some GI Joes fix a broken down vehicle, but then it turned out her really worked for Cobra and made their vehicle even worse. A week or so later this kid had a second Bionic 6 figure and we started playing out scenarios that matched that cartoon more closely.

Email ThisBlogThis!Share to TwitterShare to FacebookShare to Pinterest
Labels: Bionic 6