What SDCC Reveals have you excited?

I love SDCC Comic Con. I've never been there, but there is always tons of fun news released at the show. It always seems like there is more news about toys and movies at Comic Con than comics. I wanted to talk a little today about some of the stuff that was announced. Some stuff I'm really excited about, while other stuff looks neat but doesn't really tickel my fancy. I don't like stealing other people's images so you'll have to just enjoy my sketches. If you want to see the real thing just google it!

2015 Masters of the Universe Classics Subscription
Along with announcing the rest of the 2014 product line, Mattel finally revealed the first few figures of the 2015 subscription. I can't wait. We know who a lot of the characters for 2015 will be, because they are wrapping up the vintage figures.

Oo-larr (Vintage Mini-Comic He-Man) will be the club exclusive.

Lizard Man (Filmation) come with the Diamond Ray of Disappearance accessory
.
Ninja Warrior (Ninjor) was from the end of the vintage line.

Huntara (Filmation) was the fan choice winner from the She-Ra cartoon. 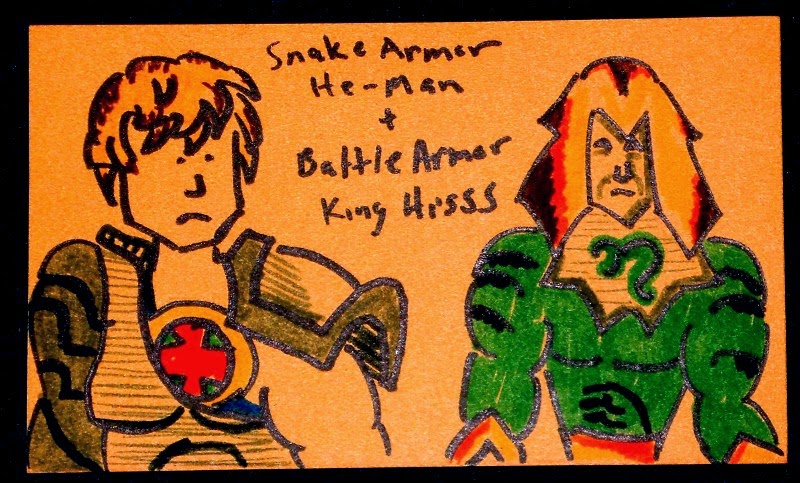 Snake Armor He-Man played an important role in the 200x cartoon as the Snakemen became the main villain in the later episodes. For the first time in Classics we will be getting a He-Man with the longer anime style hair. I really want an extra of the 200x head. I've been slowly making my own custom 200x He-Man, but the head is the main problem. King Hisss had a unique look in the 200x cartoon, but unfortunately the "snake body" isn't coming in this pack. They will include his snake torso with another figure in this years subscription. 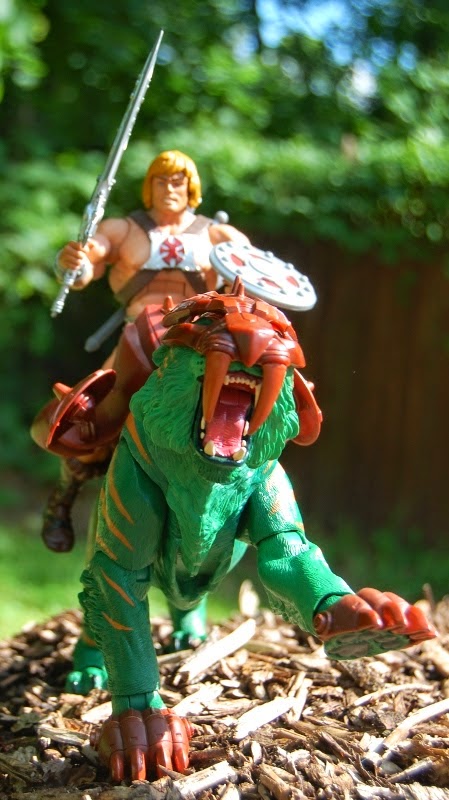 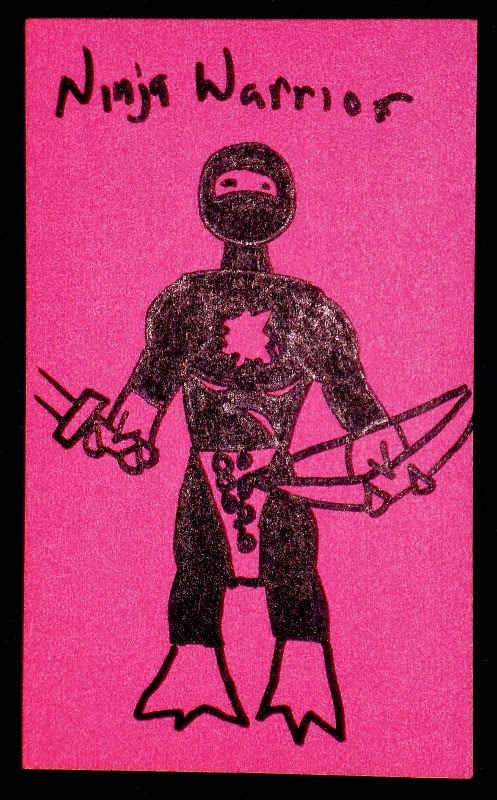 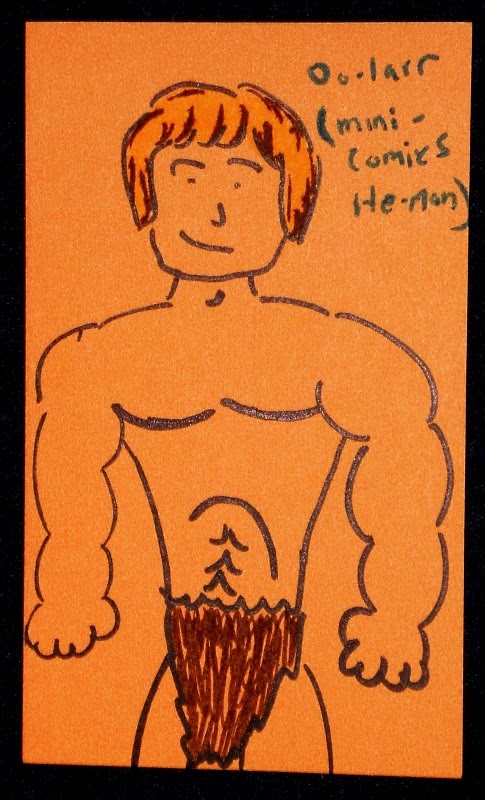 Ninja Warrior comes with a mask and unmasked head as well as several ninja weapons. Oo-Larr is He-Man without any of his armor and bare feet. He comes with a spear and two versions of his head. One looks like He-Man from the original mini-comic, the other is identical to the vintage action figure. 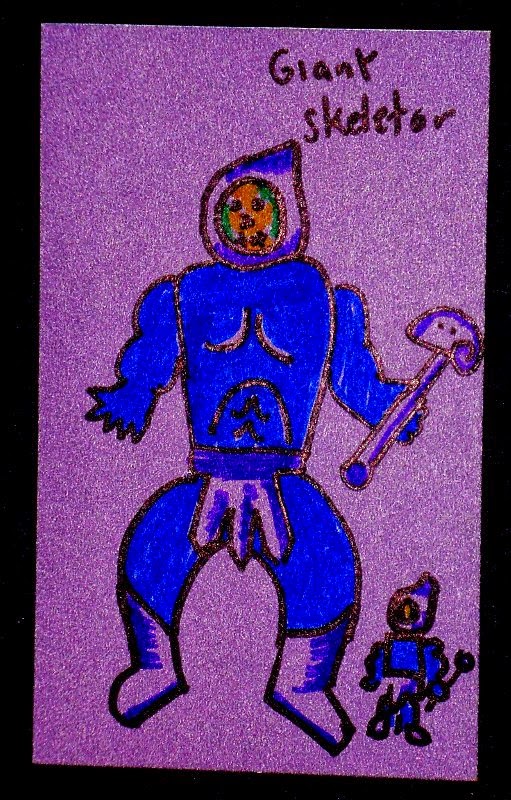 Mattel also announced MOTU Giants. These are 12" tall versions of the vintage figure. Basically they've seen that Gentle Giant doing well selling the scaled up Star Wars figures so they are trying it as well. First up is He-Man, Skeletor, Stratos, and Beast Man. They look cool, but are expensive. I'm also worried they will have issues standing up some day like the vintage figures. There are some sort of notches in the giant figures hips to help them stand.

I'd kind of like to get He-Man, but I'm hoping they change his head before the final release. His head sculpt doesn't perfectly match the vintage figure which is a bummer. 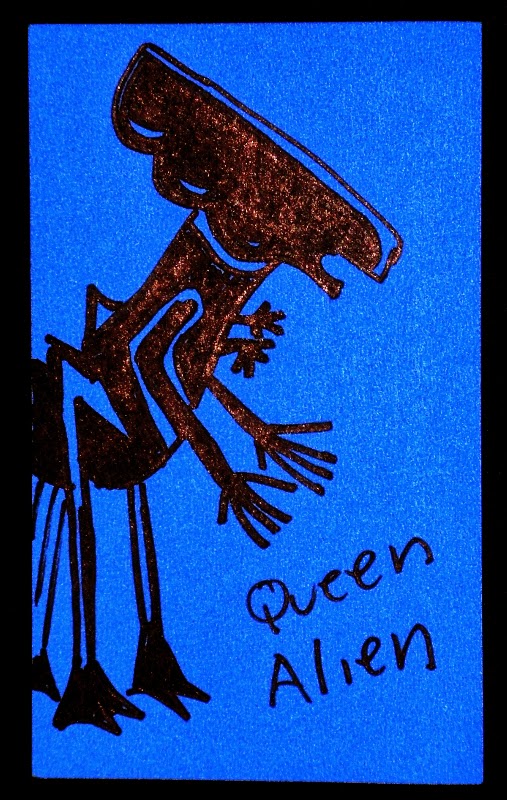 NECA had a lot of cool toys to show off. I don't collect a lot of NECA stuff, but I do like looking at them. I am really excited about the Queen Alien they announced from the film Aliens. She's such an awesome and imposing monster. At the size they are making her I think she will be really awesome displayed with my Kenner Aliens toys.

Another really cool looking toy from a company I don't usually collect is the Hot Toys Marty McFly. I don't know why I like him more than say a super hero or GI Joe character in the same format, but the photos of Marty from SDCC looked great.

Speaking of GI Joes, I didn't see anything from Hasbro for their
3 3/4" line. They did show some cool Kre-O figures. 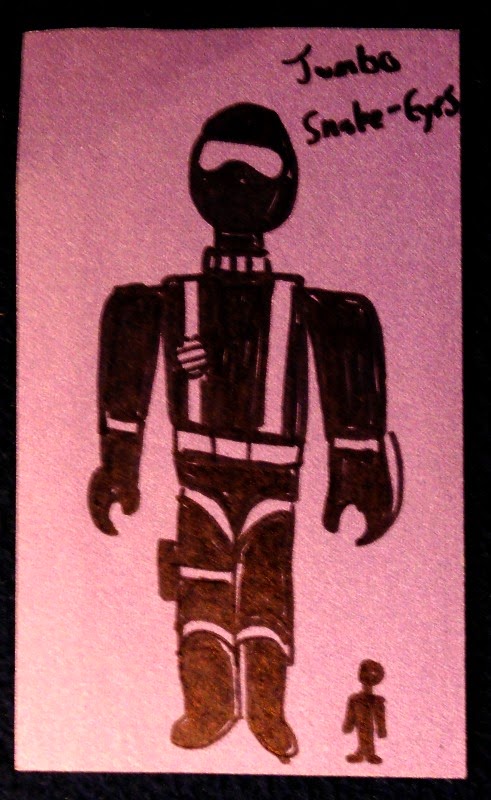 Gentle Giants is releasing Jumbo GI Joe figures. Based on the original Straight Arm figures. They are kind of cool, but I think the Straight Arm Joes are inferior to all the later figures in the line. I'm going to pass on these guys but if they ever do some of the later characters I might pick up one or two. I have two jumbo Star Wars figures currently.

The final toy line I want to talk about is Teenage Mutant Ninja Turtles. More Nick toons figure to come including a cool looking Party Wagon Van. This thing looks way cooler than the Shell Raiser. There are also 90's movie inspired Classics figures coming soon and they will be followed by 90's cartoon styles Shredder and Krang. Too bad I missed out of the previous wave that included Bebop and Rocksteady.