Today's post will wrap up Goal 2 by completing Part C.

When I stated something random I wasn't really thinking it would be connected to a major brand that I feverishly collect. I didn't really mean for it to be a piece of  GI Joe, Star Wars, or He-Man merchandise. I was thinking something like a Bionic Six figure or a Rock Lord. Something from a line I own nothing or only one item from. Maybe a line of toys most people have forgotten about.

Instead I bought a rubber soap dish that looks like the GI Joe vehicle the Desert Fox 6WD. The vehicle is a single piece of rubber and fairly well detailed for what it is. It includes several different colored paint apps and a few stickers. The identical driver and passenger are non-removable. The jeep has no moving parts. While the driver looks a little like Skidmark, the figure that came with the  3 3/4 inch toy, he and the passenger look like their paint apps were designed while looking at the figure Repeater or Recoil. 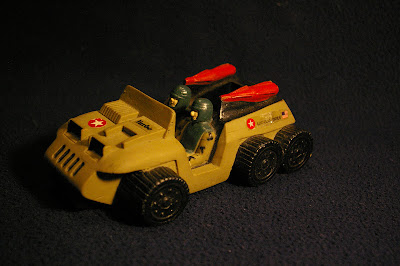 The soap dish was made by Ducair's Bioessence in 1988. It's not the only GI Joe soap dish ever released. The dish came with three small "hotel" bars of soap. 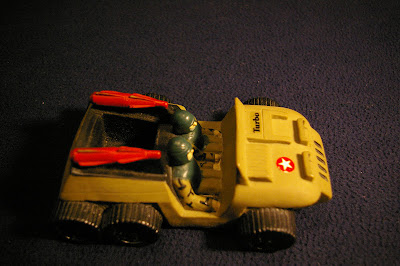 There is a compartment behind the driver and passenger, between the two red missiles where you can store a bar of soup. On the actual toy there is a pivoting gunner station in the back section of the vehicle. 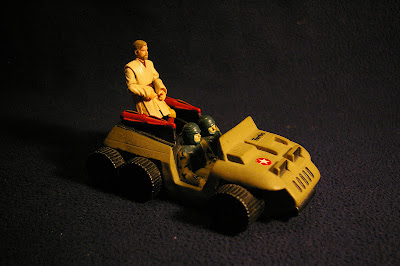 This picture features an 3 3/4 inch Obi Wan figure to give you an idea of scale. It is much smaller than the actual Desert Fox toy. I just love adding these kinds of non-action figure items to my collection. Now I'm debating if I should display it with my toys or in the bathroom.
Posted by Buzz Chuck at 6:29 AM