Back to Toy Hunting

It's interesting how not having my license gave me lot of free time at home to work on the blog. I did my first couple of Animated Reviews out of sheer boredom from not being able to get out of the house. For the past few months, I really haven't been able to go toy hunting. I've been reviewing the Matty Collector toys as the come out, but almost everything else I've posted are toys I already owned.

So, with my new found freedom, I hope the quality of the blog doesn't slip. I plan to keep up the frequency of the posts, but I have a feeling there will be less Animated Reviews. I actually got so far behind on doing the videos because of the hay ride. I have posted anything about the past two months worth of Matty Collector figures.

As a side note I want to talk about toys on TV quickly. I have wanted to go to Kevin Smith's comic book store for years, and of course his show Comic Book Men have increased my desire to do so. This weekend is busy with visiting friends I haven't seen much in the past few months and Retro Con. I am going to try to work in a trip before long. I'm sure I'll post about that trip when I go. Also I need to mention how much I have been loving the current season of Robot Chicken. There have been some really good GI Joe and He-Man skits. That show just keeps getting better.

Now, onto my finds from yesterday. I have been dying to get the Dollar General GI Joes. I have been so worried that I would not be able to find them in stores by the time I got my license back. They have been pretty rare all along. I drove to Dollar General today and found a complete set! 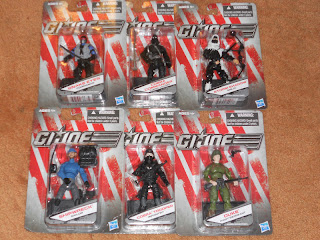 I was also very excited to find Metal Head from the new TMNT line. I bought all the previous figured off Amazon while I was without wheels. The episode of the cartoon that featured him was really funny, so I really wanted to pick him up. I wish he came with a remote control accessory for Donny to use. 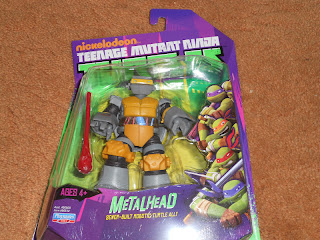 Look for future posts about Metal Head and the GI Joes.
Posted by Buzz Chuck at 6:25 AM