Sky Escape Joker was released by Kenner as part of the Dark Knight Collection. These were the figures in stores between Batman (1989) and Batman Returns. The line was mostly just Batman variants. One year my sister and I got gift certificates to Kiddie City (a toys store back in the '80 - turn that frown upside down) but there weren't any around us. We had these unused certificates for months. Then one day my parents informed us that we were going to be going near Kiddie City when we went to my Pee-Wee Football game that weekend. So my sister and I were excited to finally get to used these gift certificates. I was able to get a Cop and a Crook from Hasbro's COPS 'n' Crooks line as well as this Joker. This was the second joker in my collection at the time. I really liked that the head sculpt on him looked more like Jack Nicholson. I really wished I could have put this head on the purple suit body of the Joker figure released for the Batman movie toy line. 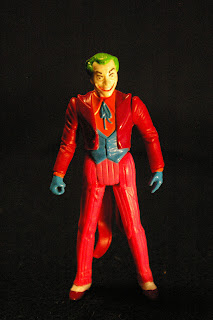 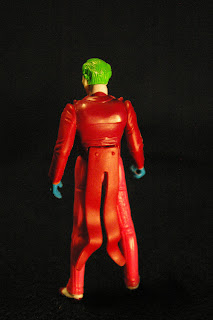 This figure reused the Super Powers Joker figure body with a new head. This time he is wearing a red suit. He has some orange and blue details. The figure came with a pistol with a very long barrel (lost years ago), like the one he used in the '89 movie. He also featured a helicopter back pack that allows him to escape into the sky. 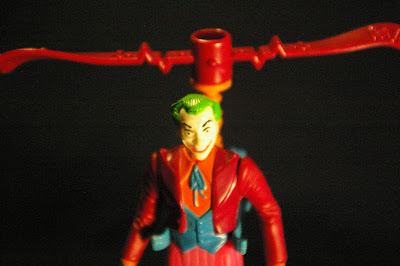 This helicopter back pack was reused from another Kenner toy. The cat burglar character Claw from the Police Academy line also came with this back pack molded in different colors. I believe Claw was released first. Kenner actually reused a lot of toys for the Dark Knight Collection. Lots of  Super Power figures as well as vehicles from Robo Cop and Silver Hawks 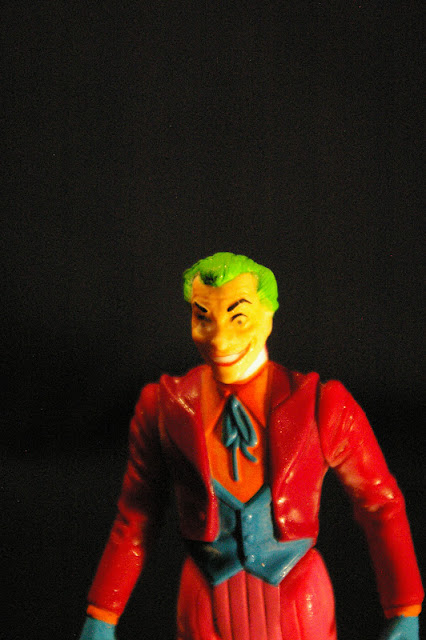 The biggest selling point about this figure to me as a kid was that his face would change from white to flesh tone when put in cold water. As a kid, our playroom was in the basement and it was always on the cold side down there. For most of the year when I would pull this figure out of the box my super heroes were stored in his face would be white I'd have fun touching his face to heat it up and turn it white again.