When the Batman movie was released in 1989, I  had to get the toys. Batman was my favorite hero and I was never able to get him during the Super Powers days. The Joker figure was a nice representation of the character from the comic, but his head sculpt and height were not very movie accurate. This Joker figure is very tall and thin. 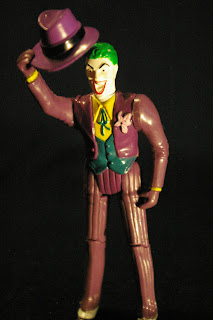 Joker came with three accessories: a purple hat (that doesn't fit real well), a black walking stick (which I lost in the back of my mom's station wagon as a kid), and a bellows that is part of his action feature. 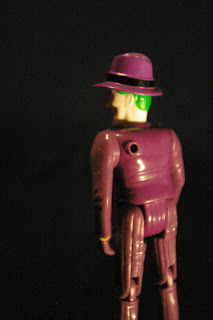 He has a good  all around sculpt even though his face doesn't look particularly like Jack Nickelson. He has nice clean paiint apps on his head and shirt. The rest of his body is molded out of a bright purple plastic. 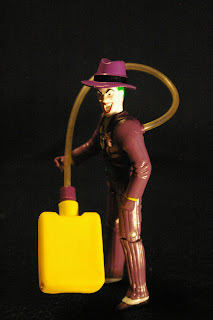 The bellows included with the Joker can be filled with water and connected to his back. This allows him to spray water from his lapel flower to simulate his acid spraying prank flower.
Posted by Buzz Chuck at 8:12 AM