In addition to that, I really like backer cards and card art for action figures. I love how different lines do their "cross sell". GI Joes has the card art shrunk down on the back. MOTU has little drawings of the action figures, and Star Wars had a photograph of the entire collection of toys.

I have tons of backer cards laying around from various toy lines, and when I find them cheap I like to pick up old ones. I like to have an example of the packaging from each line. More recently I started saving a carded figure from most lines, but for the old toys I just like to have a card back.

At Retro Con one of the dealers had some old Star Wars card back for a dollar a piece. I decided to get a few. You will notice that many of them have a circle cut out. This is the little emblem that was clipped and mailed in for figures like Boba Fett and the Emperor. When I picked these out I went for variety on back of the card back (example 12 back or Boba Fett offer) as well as for toys I like. 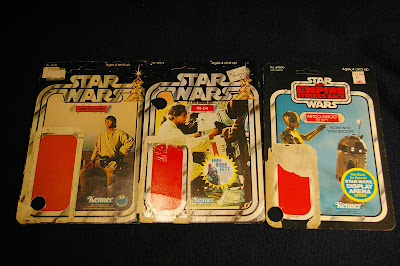 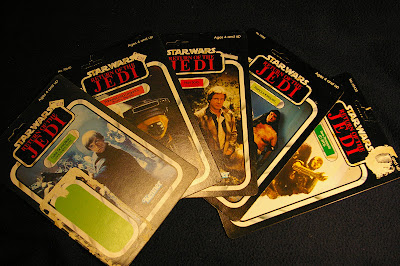 Luke Skywalker (Jedi), Princess Leia (Bosh), Han Solo (Endor)
I really like these versions of the characters.
They were all great toys and Show of the Return of the Jedi Collection.
Rancor Keeper (I think of my buddy Brian every time I see this guy so I had to get him)
C-3P0 (I felt like I needed his cardback to go with R2-D2) 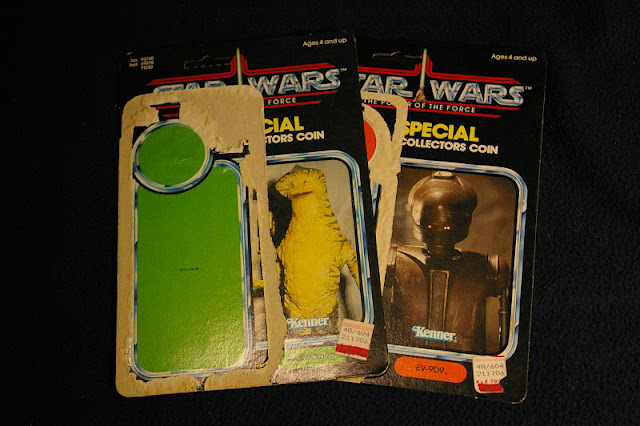 Amanaman and EV-9D9 both are just cool toys from the end of the series.
These cards show off pretty much the entire line of vintage Star Wars toys with a few exceptions.