Yesterday's post highlighted my experience at Retro Con meeting and getting autographs from a couple of Thundercats (and SilverHawks - Larry & Peter) voice actors. So today we are moving on to Goal 2 - Part A

2) Buy lots of  cool Toys
* at least one Silverhawks

Obviously I didn't know if there would be any SilverHawks for sale, or who they would have, but I figured there would be a good chance of finding at least one. It turns out I was able to get my favorite SilverHawk. Bluegrass was the only toy from this line I had as a kid. I really liked the show and a kid I went to school with had them all (which made me jealous). At Retro Con I saw a couple of carded SilverHawks for very high prices and a couple of loose figures in various conditions. 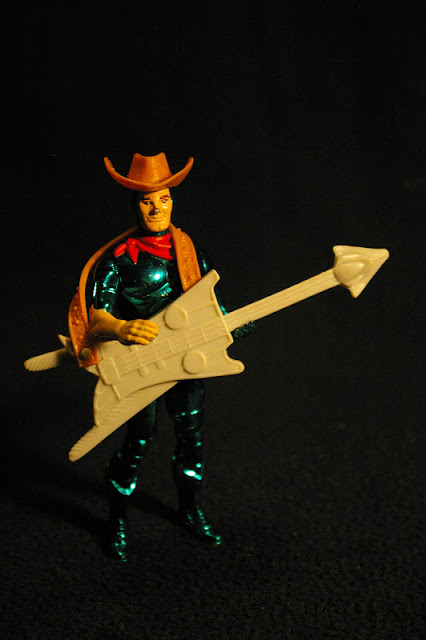 All the SilverHawks toys featured a cool vac-metal chrome finish on most of their bodies. They also all had an action feature and a bird accessory. Bluegrass stands out because his armor is an interesting blue/green color and includes a cowboy hat. It can be difficult to find loose SilverHawks in good condition. Their flesh colored paint chips off the chrome easily and their chrome can also rub off of the figures. 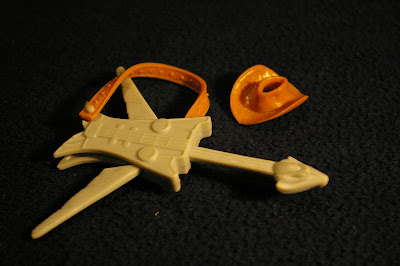 In the cartoon show Bluegrass has a guitar called Hot Licks. The guitar could be played, used as a weapon, or help him pilot the SilverHawks ship. Each toy came with a bird accessory, heroes and villains alike. All the birds had some sort of a feature. In the case of Bluegrass his bird is his guitar. His toy package refers to his bird as Sideman. When you push the head of the guitar towads the body the neck shortens and the wings fold out. Bluegrass is the only SilverHawks hero in my collection currently. I have two villains and several  of the characters bird accessories. 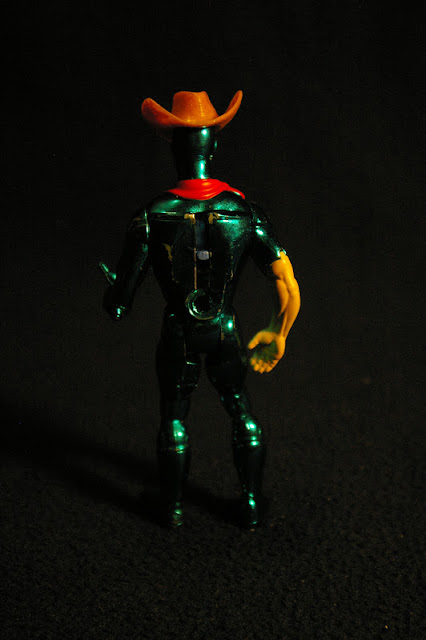 Bluegrass is the pilot to the SilverHawks ship, the Miraj (pronounced Mirage). Unlike the rest of the Heroes he does not have spring loaded wings that unfold when you squeeze his legs together. Instead his back can be used as a spring-loaded launcher for his bird. 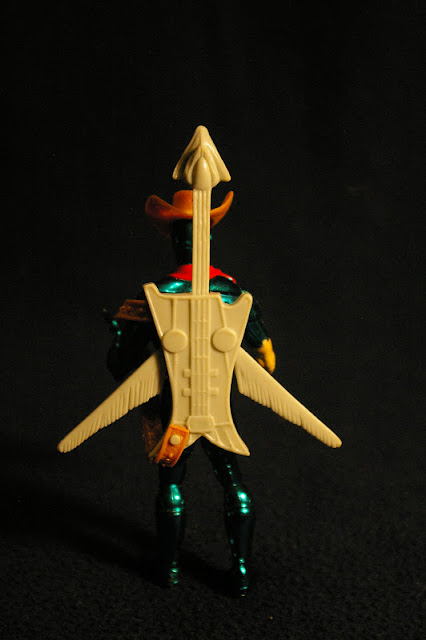 Since I did not have the Miraj as a kid, and a Silverhawk that can't fly is not very exciting I used to attach Sideman to his back and pop out his wings. Then I would pretend he was a jet pack for Bluegrass.

Email ThisBlogThis!Share to TwitterShare to FacebookShare to Pinterest
Labels: SilverHawks