So, yesterday I posted some general pictures from Retro Con. Mostly pictures of the attendees costumes and the vendor space. Today's post will focus on my first Retro Con goal which was getting autographs from the Thundercats voice talent. 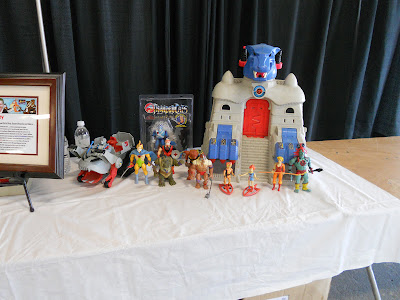 Rose, the Convention Organizer, made up this little display with items from her collection
and had it sitting at the far end of the table where the voice actors were signing. 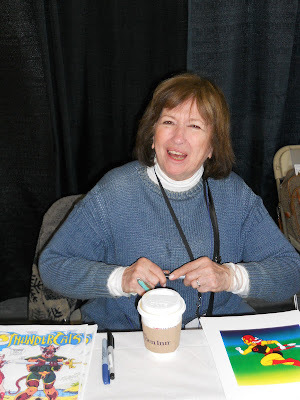 I talked to Gerrianne Raphael, the voice of Pumyra and Chilla briefly. She is not as well known because her characters were from the second season. This means they had less screen time and the one that had a figure is pretty rare. I told her I enjoyed her panel at Comic Con, and that I watched it online. She smiled and said it was a lot of fun. 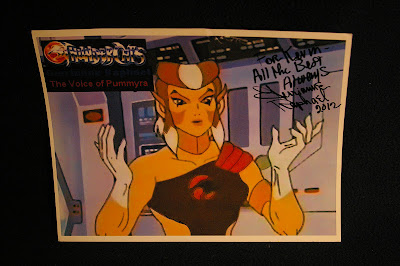 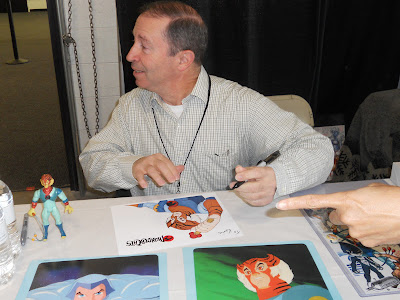 Peter Newman voiced several main characters including Tygra, Wilykat, and Monkian. He also provided the voice for Hatchiman (a supporting character) as well as Bengali (one of the new Thundercarts in season 2). Peter also voiced Quicksilver, the main character in Silverhawks.

I actually talked to Peter for quite a while. We talked about the old Thundercats show and the new show. He was surprised at how much they changed Wilykit & Wilykat's characters. I told him that I liked that they had Larry do the voice of Lion-O's father in the new series and when they explored Tygra's past I was sad he didn't play his father. He said "I can still talk pretty good, why don't they call me?"

The thing that really made my day was that he did the Monkian voice while talking to the guy before me. It was just so much fun. I love the sound of the voice with the monkey sounds between some of the words like a stutter. Monkian was the only villain I had from the Thundercats line as a kid and so  he became my favorite (I always had more good guys than bad guys for almost every toy line as a kid)

Peter was also asking me what I thought a carded Hatchiman was worth. He said he has some vintage Thundercats merchandise that he bought years a go and has been hanging on to. He specifically mentioned a carded Tygra with Wilykat figure, a carded Hatchiman, and a sealed metal Thundercats TV tray. It sounds like he's thinking about selling off his little collection at some point. 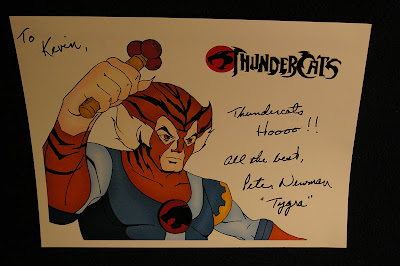 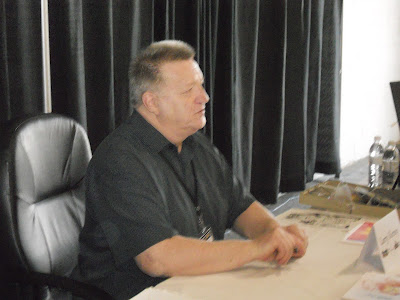 Larry Kenney provided the voice of Lion-O and Jackalman. He also played Lion-O's father, Claudus, in the new Thundercats cartoons. Larry also voiced Bluegrass, my favorite Silverhawk. I met Larry a year or two ago at a Zoloworld event (the company that makes the protective cases for carded figures). I talked to him a lot there. This time (it was early in the show when I went over) he was kind of fidgety. He walked away from the table a few times and so I just didn't strike up a conversation. I'm not sure if he wanted to look around the show, or just hadn't settled in yet. I have included a photo below of my Larry Kenney autograph hanging on the wall at my house. That was the first time I've ever "bought" a convention autograph, but it kind of got me into it. I have four Star Wars related autographs framed and hanging in my house. 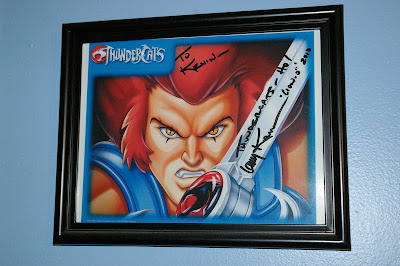 Goal One... Complete! Time to start looking at Goal Two.
Posted by Buzz Chuck at 12:03 AM