Monsters in My Pocket - Set Up

In the days before digital photography and the internet I was unaware of any terms for posing toys and taking pictures of them. (Articulated Comic Book Art or Dio-Stories for example) My best friend Derek and I used to set up our toys and take pictures of them. Often times we had a little story in mind that went with the photos, but they were never really documented. We always called these photos "Set Ups". We usually did them at Derek's house. His mom was more likely to allow us to us the camera. Remember that film and development cost money back then. These Set Up photos evolved over time. Many of the early ones look similar to this one with carpet showing and the furniture from the room in the background. In later Set Ups we used single colored sheets as ground cover and back drops.

Here is a rare example of a Set Up I did in my basement that was photographed (I did them a lot, but usually wasn't allowed to use the camera to take pictures of them. This Set Up mostly features Monsters in My Pocket mini-figures. The "Ancient Ruins" Set Up involves a play mat, the Fisher Price firehouse, a cooler, blocks, pieces from a chess set, and some other toys. Our Apple IIe Plus is sneaking into the background of the photo also. 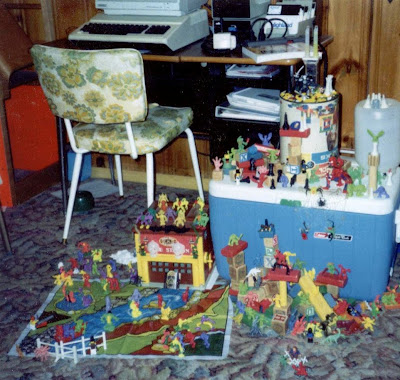 This zoomed in shot of the top of the display shows off the Skull Faced guy from Willow and Modulok from Masters of the Universe along with the Monster in My Pocket figures. 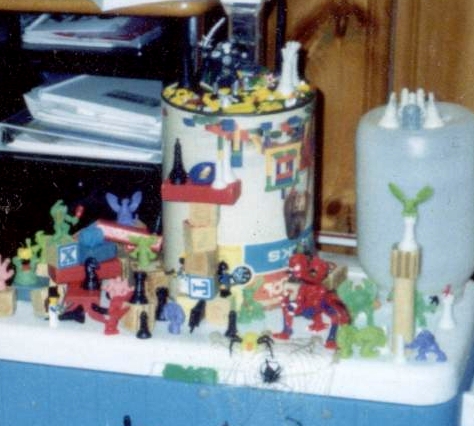 Enough reading about toys on the Internet. Get out and Vote!
Posted by Buzz Chuck at 12:43 AM