In first grade this weird kid named Derek (who later became my best friend) opened my eyes to the world of Japanese monsters. Most of the monsters in my toy collection were actually given to me over the years by Derek.  I have probably about 15 Godzilla, Ultraman, and Gamera monster toys. Derek has a collection of hundreds. Our combined collections are featured in one of our video projects called Godzilla Flick. The 10 minute version of the film won best film at Godzilla Fest 2002 in Japan.

This Mecha Godzilla, like most of the monster toys, features very limited articulation. He head and shoulders are able to twist 360 degrees. He has a very dark paint scheme unlike another more common and brighter silver version also released by Bandai. The two version use different molds as well. He has some black shading as well as yellow eyes. 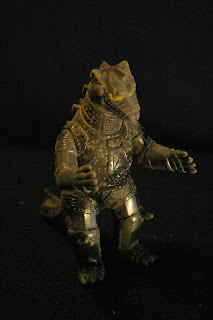 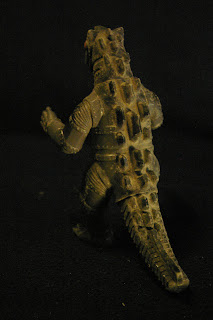 About once a year I'd sleep over at Derek's house with the specific purpose of doing a Godzilla Set Up the next day. This was where we would get all the monster toys out and set them up like a diorama and take photographs of the figures. It was usually a giant monster battle, but there was always a little story going on in the back of our minds. Below is a photo from one of these Set Ups that shows off Mecha Godzilla sneaking up on an Ultraman who already has their hands full. The battle is taking place on a small island out in the ocean. Other monsters are doing battle at sea in the background. 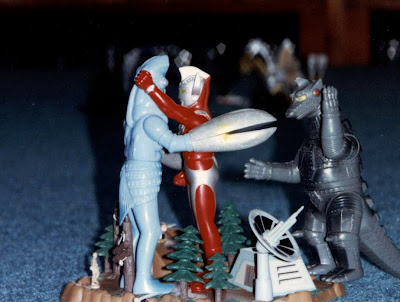 The blue carpet represented the water and a Star Wars Micro Machines Endor Play Set is being used as an island. We often used toys from other lines as props and sets for our Set Ups. Micro Machine cars and play sets always came in handy. I even made dozens of skyscrapers out of Legos one time.
Posted by Buzz Chuck at 6:22 AM