This is my final Retro Con post. I have several other MOTU toys that I picked up at the show, but they are less exciting and I'm just going to put them up as it happens naturally. I don't want one line to dominate the blog to much.

After I walked around the show a few times I didn't see any hard to find figures from the vintage MOTU line. I got worried I wouldn't meet my goal. Then I saw Tyrantisaurus Rex! This awesome beast/vehicle from the end of the line is pretty cool and basically fit the bill.

It wasn't until after I bought Tyrantisaurus Rex that I found Clamp Champ, Extendar, and Mosquitor. 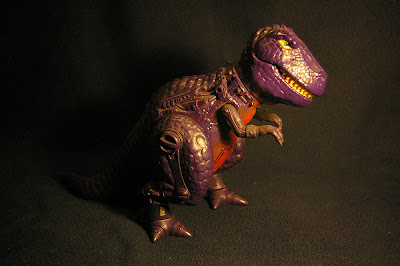 Tyrantisaurus Rex looks like a pretty normal dinosaur, but he has a few techno bit on his legs and back. The bits are painted like the rest of his body so they don't stand out that much. There is a panel that opens on his back and on his belly. The back panel becomes a seat for a rider and reveals a lever that can launch a weapon from his belly.

In the story line for the Power of Grayskull series (which died before all the toys were developed and released) The Snake Men where the main bad guys on Preternia. So Tyrantisaurus Rex was a bad guy dinosaur. He originally had a blue gun that connects to his shoulder and a green weapon that pops out of the panel on his stomach.

His legs and arms feature limited articulation. He has swivel joints at the shoulders and hips. His mouth is also articulated with a spring loaded mechanism that snaps his mouth shut.

I found this image on facebook after the show. It was posted by one of the photographers for the show.  If you see the white pillars on the right hand side of the pictures. I am to the left of the front most pillar. I have a beard and am wearing my gray Pixel Dan shirt. There is a guy holding a little kid between me and the pillar. I am holding Tyrantisaurus Rex in the photo as I was talking to the vendor that sold him to me.