Iceman has been my favorite X-Men for as long as I've known about them.  When I got into he X-Men toys of the 90's I was just waiting for a figure of him. The figure was no disappointment. He was made of clear plastic and had a cool action feature where the white icicles on his chest turned blue when you put him in the freezer for a few minutes. I had a blast with that feature. One day I took Iceman outside to play in the snow, I tossed him onto the snow and the glue joints around his torso snapped and he fell apart. I was able to reassemble him and contnued to play with him for a while like that. I frequently pretended that Mr. Sinister could "shatter" Iceman with his mutant powers. 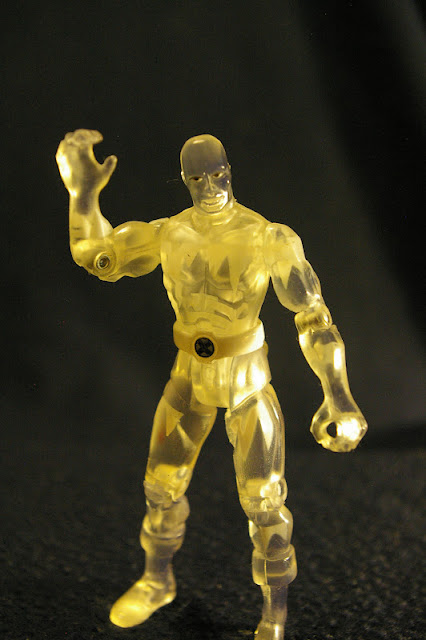 When I sold off my X-Men collection I glued Iceman back together and sold him at the flea market. If he hadn't been broken I probably would have hung onto him, being my favorite character. Several years later at an antique tractor show and swap meet I saw Iceman for a dollar. I picked him up. This motivated me to dig up the few X-Men figures in the attic that hadn't sold all those years ago at the flea market. 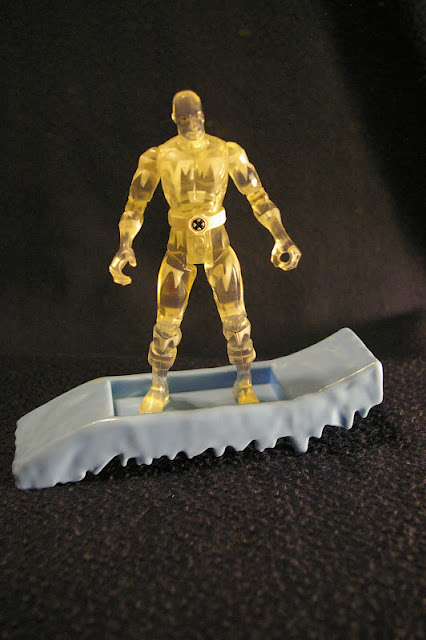 Iceman's sculpt is fairly simple.The one flaw with his design is that his head is a little small, especially compared to his hands. He has a white X-Men belt and came with a blue plastic ice sled. I didn't know this as a kid, but apparently you were supposed to stand Iceman on the sled, fill the depression in the center with water and freeze it. Once the water is frozen you could remove the figure with an ice block on his feet and slide him on a smooth surface. There was also a second version of the figure that was made of clear blue plastic and did not have the color change feature.
Posted by Buzz Chuck at 12:08 AM