I was in college when Spider-Man came out, and it blew me away. I loved every minute of the movie. Spider-Man has always been my favorite Marvel Super Hero. I picked up a number of figures for the film.  JJJ's figure has a great head sculpt and articulation that isn't ruined by his action feature. Jameson comes with a desk and chair. When you activate his action feature his fist pound his desk and the items on it wobble. They paid so much attention to detail on this figure. Check out his pin stripes. 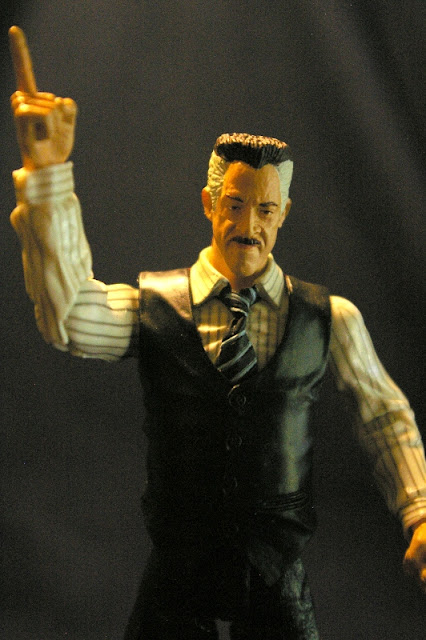 Around the time of this figures release, my buddies and I were working hard on our first stop motion animated series, Animation Creation. I was buying a lot of toys at the time specifically for their accessories. We needed lot of props for the show. J. Jonah Jameson's chair was used by my character in the commentary portion of every episode. JJJ being a normal looking civilian was an added bonus because he could then be used in the show as such. Along with props we also needed characters for the segments of the show. Most of the time the bits didn't call for Super Heroes and Soldiers. In Episode 3 "Fly Me to the Moon", Brian was looking for some more characters to add to his on going shoot 'em up bit "Brian's Reservoir Dogs" that featured his set of McFarland Reservoir Dogs toys. Bringing a pointing finger to a gun fight isn't the best idea.


Brian's Reservoir Dogs  - Part II
Animation Creation 3 "Fly Me to the Moon"
Posted by Buzz Chuck at 7:24 AM