I still remember the first time I saw Clerks. I was in high school and I was talking to my best friend's Dad, Doug Moench who is a comic book writer, about the movie Mall Rats which I has recently seen at my friend Brian's house. Doug told me about Kevin Smith, the writer/director of the two films, and how he actually opened a comic book store after the success of his independent film. From that moment I have always wanted to go to the Secret Stash. At the time it seemed so far away and I just never went. With the debut of the show Comic Book Men my interest in going to the store was renewed. So, I finally went. 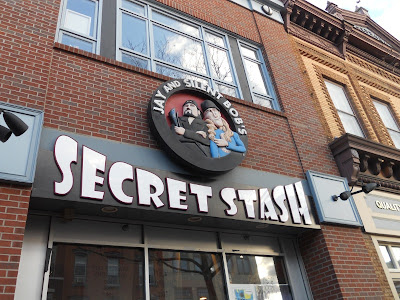 The store is well organized and has some interesting architectural features and moldings inside. There are also several display cases full of props from various Kevin Smith movies. I love the fact that they have many of the high priced (rare) book displayed on the wall above the normal shelves. I miss that about many comic stores. When I was a kid every comic shop carried back issues and the best ones were always on the wall. Less places are carry back issues and so less places have them displayed this way. It's cool to look at the classic covers of some of the most famous issues in comic book history.

It's funny how different the store really is from what you see on TV. Many of Kevin Smith's movies are a little controversial because they use foul language, talk about drug use, and poke fun at religion. In the show you never really see all the Kevin Smith stuff. The giant Buddy Christ or Bluntman and Chronic's vehicle. The store was also much dimmer than in the show. They must bring a lot of lighting with them to film.  The second counter (in the middle of the store) that they have been predominately using this season has lots of merchandise and junk piled on it while I was there.

I was also expecting a lot more vintage toys and back issue comics. They has some modern and some vintage toys. They had a decent selection of the new Nick TMNT figures, some Walking Dead, a few vintage Mego toys, and a couple of boxed high end Star Wars vehicles from the late 90's early 2000's. They had a lot of high end back issue comics on the wall, but there were less back issue bins to go though than I would have expected. 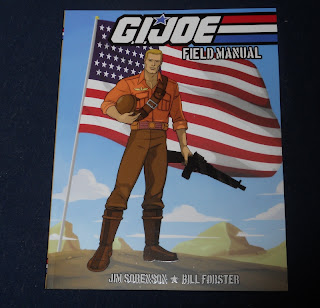 The GI Joe Field Manual, I knew this was coming out, but didn't know it was out. This book is a collection of model sheets and designs from the 80's Sunbow cartoon. It's pretty cool, but I would have liked a little more information. The "writing" is pretty much just the stuff from the characters file cards (and probably the cartoon shows series bible). I enjoyed looking at the designs, but I didn't really learn anything new. 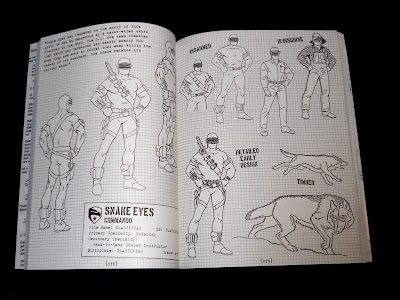 I wanted to get a back issue for my collection to commemorate the trip. They didn't have any GI Joe back issues that I saw. There wasn't any Batman books that would fill in holes in the 90's run I collect. So I ended up grabbing this 4 part Night Crawler series that I remember reading at school. A kid I was friends with in 3rd grade has this series and he was a die hard X-Men fan. We used to play X-Men outside at recess. He would pretend he was Wolverine, and I'd pretend I was Iceman. This is back in the good old days when the first wave of Toy Bix X-Men toys came out. 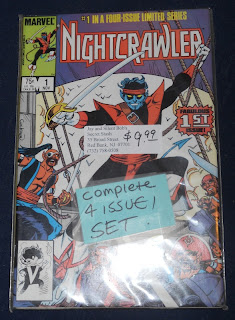 I had to get something Kevin Smith while I was there. Batman Cacophony... I was thinking about asking Walt Flanagan (Artist of the Book and Manager of the Stash) if he'd sign it. When he rung me up I just got a funny vibe and so I didn't bother asking. He didn't say much of anything during the transaction or while I was in the store period. So I turned off all my fan boy impulses, other than to say I was enjoying the show when he handed me my receipt. 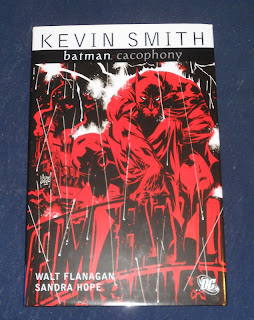 There were three guys working at the store while I was there. Mike Zapcic was there for a short time and then left. He was running the register when I walked into the store. He seemed very friendly as I over heard him running transactions. Walt was there "eagle eying" everyone for a while when I first got there. He sort of stood in the middle of the store watching everyone. He did answer the cordless phone "Comic!" just like in the show. I got a kick out of that. Once Mike left Walt hung out at the register. There was also a teenager there that would pretty much just circulated and kept and eye on people.

I'm glad I went. It was cool to be there. I can't really see driving an hour to go there very often. My "local" comic book shops do a good job of keeping me in reading material and I see more toys at the Flea Market each weekend. If I go back sometime in a few years I'll make sure I watch all the View Askew movies again so they are fresh and I can pick out each and everything in the display cases.
Posted by Buzz Chuck at 9:25 AM