While I was in college, long before this blog existed, my buddies and I were writing for a site called Obscene Newg.com. This website was joint project containing lots of different articles, posts, and artwork. Newg was up and running while we were working on our two stop motion animated shows Animation Creation and Action Figure Adventures. AFA was a pretty ambitious project due to the sheer number of characters we had to find voice actors for and the amount of time it took to edit the show.

I made this goofy picture for the old website when I needed to do a quick reshoot involving Cobra Commander and some Vipers but couldn't find my tripod. In the background you can see Clutch and Barbecue sneaking off with a video camera and tripod. The two of them were important heroes in the show. 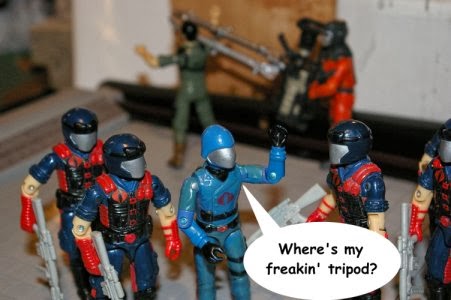 I had a lot of fun working on our old site and both the shows, unfortunately life and everything else gets in the way and my buddies and I don't collaborate anymore, but I still love looking back at the old episodes on youtube.
Posted by Buzz Chuck at 10:34 PM