In honor of all the snow we got over the weekend I decided I needed to post a snow picture. I actually photographed almost every arctic toy I owned last winter, so this wasn't taken over the weekend. The Polar Battle Bear is a small GI Joe vehicle originally released in 1983. I've owned at least three of these things in my life time. As a kid I had two Battle Bears that were missing a lot of parts. I sold them off at one point when I thinned out my vehicle collection. Later on I picked up this one in a lot. It's missing some decals, but looks pretty good. 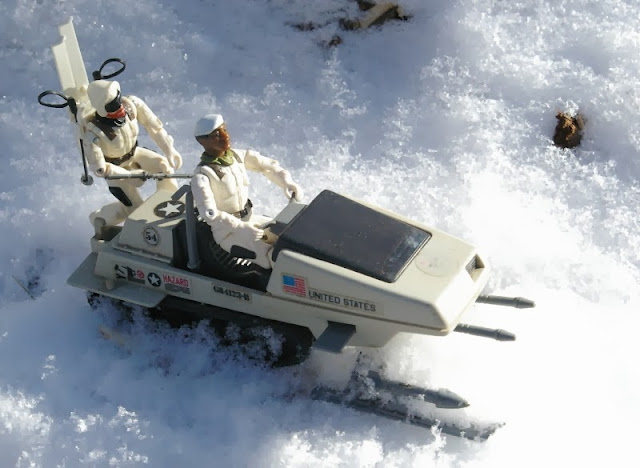 If you have a Battle Bear or are looking to get one, take good care of the skis. They break easily so look them over well or treat them gingerly. Other easily lost or broken parts include the two grey missiles that attach to the skis. There are two thin laser guns on the front connected by a grey bar, There is also a small grey roll bar behind the drivers seat and a white engine cover tha is often missing.

Pictures above is my custom  Arctic Stalker driving the Battle Bear while Snow Job rides on the running boards.
Posted by Buzz Chuck at 9:53 PM