Today's post features two different Robin action figures that I have picked up at yard sales over the years missing their accessories. The first one is Robin from the Batman Returns toy line. In early drafts of the film Robin was going to be included, but with all the characters all ready packed into the film it seems the idea was dropped. They made a Robin figure anyway, because just like the first film they planned to merchandise the hell out of the picture. This Robin figure looks a lot like the 90's comic book Robin.  He has a red tunic with short green sleeves but long green pants. The outfit's torso looks slightly armored. This figure came with a nice cloth cape that was black on the outside and yellow on the inside. He also came with a ridiculously large grappling hook firing backpack. 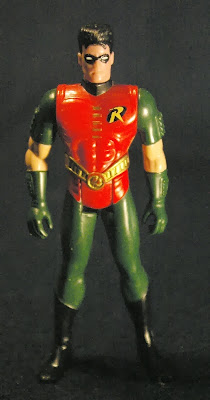 The second Robin is called Crime Fighter Robin and comes from the later portion of the animated series toy line, once it was revamped as the New Batman Adventures. This Robin is the younger Tim Drake from the New Adventures of Batman & Robin show and is styled like that cartoon show. He wears a mostly red outfit with black gloves, shorts, and boots. This Robin originally included a short plastic cape that was yellow and black. He also came with a bulky red mini jet vehicle.
Posted by Buzz Chuck at 6:07 PM