I missed Star Wars figures being in retail stores as a kid. I was born in 1982 and by the time I was playing with action figures and had seen a Star Wars movie, the figures were long gone. My entire childhood Star War collection came from yard sales and comic shops. Due to my heavy involvement with the GI Joe brand as a kid I assumed that the pilot figures came packaged with the vehicles. I was shocked to find out that the X-Wing Pilot didn't come with the X-Wing fighter. What would you do with this figure if you didn't have his fighter? 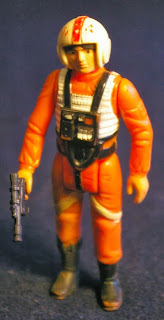 As you can see, Luke Skywalker X-Wing Pilot is a hard character to find with good paint apps. The white of his vest rubs off his back. The gray of his boots rubs off and the logos on his helmet show wear very quickly as well.

My buddy Derek and I used to both collect 2nd hand Star Wars figures and we had a deal that if one of us got a second copy of a figure that the other one didn't have we'd give the duplicate to the other person. I bought a lot of toys at yard sales, and Derek's Uncle Bobby in Chicago would mail him 2nd hand toys a lot. So I was the first to have an X-Wing Pilot. When I got a 2nd one at a yard sale I gave him to Derek. Later on I picked up a third which stayed in my collection to bolster the ranks of my Rebels.  I eventually (in Hiigh School) got an additional X-Wing Pilot who has been on my work bench for a while. The plan was to make a custom of an alien X-Wing Pilot. I was going to do a head swap with a Walrus Man or Admiral Ackbar.  Out of the three in my collection, only one has a halfway decent paint job. 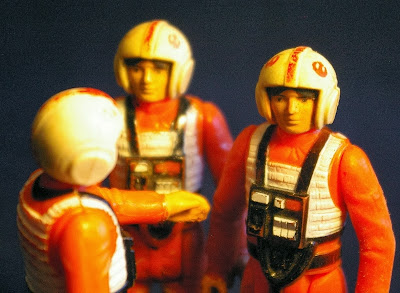