A couple weeks ago I posted about a toy helicopter that came in a set of Green Army Men. I also mentioned that it happens to be the type of helicopter used by the company my Dad works for. I took this photo of that Helicopter along side two other toys in my collection of the same style helicopter.  I some how missed posting it, and just came across it. So, I'm putting it up today. Each year I try to find my Dad some sort of Sikorsky S-61 toy. I'm not always successful, but when I am I buy one for him and one for me. 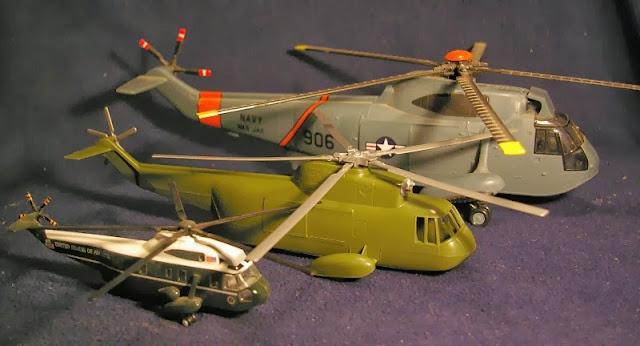 The toy in the back is the largest and most detailed. It's decorated in a Navy paint scheme. In fact, this particular helicopter's deco is from the Navy Base in Jacksonville Florida, where my Dad started his career in aviation as a civilian contractor. It's a little hard to see, but JAX is visible on the tail under the word Navy. That toy company also made that same model in a dark blue Air Force paint scheme. (We both have that one as well) The Green Helicopter in the middle is also available in tan and is made by Tim Mee. I'll try to get a picture of the tan version when my dad open's it on Christmas. The smallest helicopter is a die cast toy painted up as the Presidential Helicopter, Marine One.
Posted by Buzz Chuck at 6:40 PM