Alien Benzene is a villainous monster from the Ultraman series. Some how my buddy Derek got two of these figures and eventually gave me the duplicate. Like all of these monsters made by Bandai, the figure's tag was all in Japanese. Through some online research I discovered his name is Benzene Seijin, but the Ultraman Wiki calls him Alien Benzene. Apparently he comes to Earth to steal gold to use as medicine for his chronic illness. 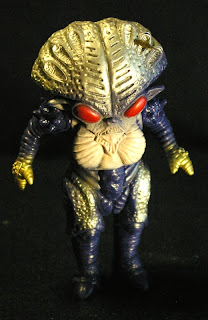 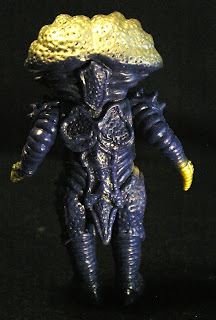 The alien is mostly blue with a giant silver head. Like the rest of these style toys his shoulders are his only points of articulation. Due to his small feet and lack of a tail, this monster frequently falls over. He was a real pain to animate in our monster movie, Godzilla Flick.