As a kid I had a lot of early GI Joe figures because a neighborhood kid gave me a lot of his toys as he out grew them. My first brand new Joes were from the 1986 line. The cartoon made me aware of a lot of the older characters, and I really wanted to get them, Storm Shadow was one of the figures I was dying to find. Sometimes you could luck out and find an older figure warming a peg at a grocery store. I never was so lucky. I found a Storm Shadow head and front half of his torso in the bottom of a box of loose toys at a comic store when I was in late elementary school. I put the head on a spare Hooded Cobra Commander body and pretended that Storm Shadow wore business suits while acting as Cobra Commander's body guard. Later (once the Internet was a thing) some offered me $35 for my custom suit wearing Storm Shadow, so I sold him. I eventually bough a loose Storm Shadow of a toy dealer and then slowly acquired all his accessories from yard sales and other dealers. 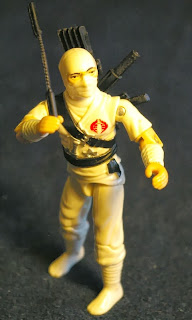 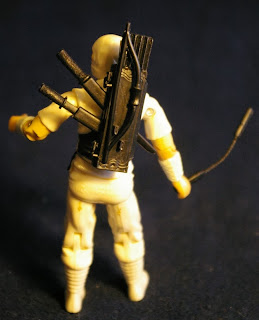 Storm Shadow wears an all white ninja outfit including a mask. He has a black belt and sash. Stormy has a red Cobra logo on his chest and a few sculpted on weapons tucked into his belt. One of the coolest things about Storm Shadow is that his backpack can hold all of his accessories. He has a black back pack that serves as a quiver (holds arrows). The back pack has slots to hold both his long and short swords. His bow can clip to the outside of the backpack and his nunchucks can be placed inside. 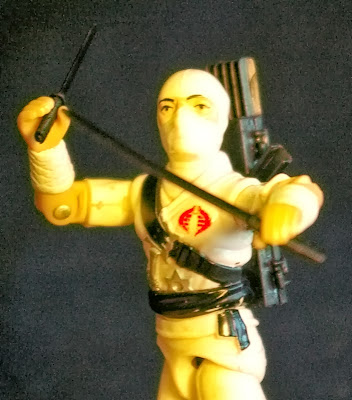 When I was picking out figures to include in the main cast of my stop motion animated series, Action Figure Adventures, I knew I wanted Storm Shadow. He got the most screen time is episodes one, three, and eight of the series. He's a pretty straight forward character in the series and has a cool ninja battle with Snake Eyes in episode three.
Posted by Buzz Chuck at 9:44 AM