I got really far behind on posting about the new MOTUC figures. So Frosta is a couple of months old now. She is a pretty good representation of the character. She takes most of her design details from her Filmation cartoon appearance. Some of the most discussed attributes of the figure are her gray/white details that aren't white enough for many fans and her translucent blue hair. I don't have a problem with either one of these design choices. 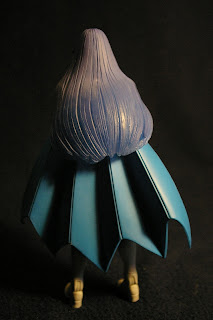 Frosta comes with a windmill like staff and a shield. These both are modeled after the accessories her vintage figure (doll) came with. I had been looking forward to Frosta for a while now. She made quite a few appearances in the cartoon, and she always stuck out in my mind because she had an over the top crush on He-Man in at least one episode. 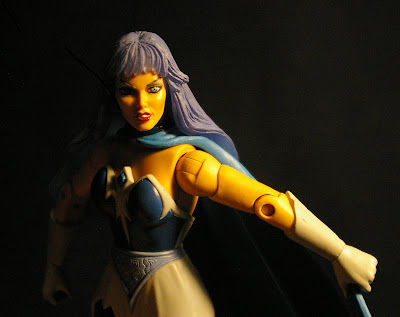 Some how the people assembling the figures in China reversed her forearms and so all the MOTUC subscribers will be receiving a free gift at some point in the future. We don't know what it will be other than it will not require new tooling. Many people with it will be a repaint weapon for Frosta. Others are speculating some sort of Orko variant because the Ghostbusters Subscribers got a Slimer variant when the line ended.
Posted by Buzz Chuck at 6:15 PM