I have always loved Spider-Man's black costume. Since it's first appearance in Secret Wars I have loved the simplicity of the black and the boldness of the large white spider logo. I have always wanted the black costumed figure from the Secret Wars line, but he's genrally more expensive than I care to spend. I picked up this super articulated Spider-Man from the Super Hero Show Down line. 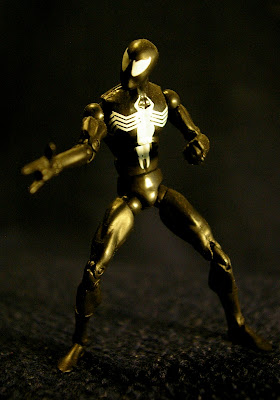 This figure came with a base, some trading (game) cards, springloaded rocket launcher, and some gaming dice. I've never played the Super Hero Show Down game. I only own a few figures from the line. I picked up Spider-Man (Blue/Red and Black), Thing, and Doc Ock from SmallJoes.com when their were on clearance years ago. He's a pretty nice figure, but occasionally the joints fall apart. 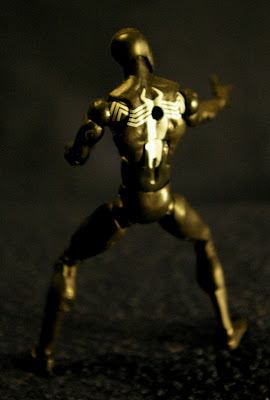