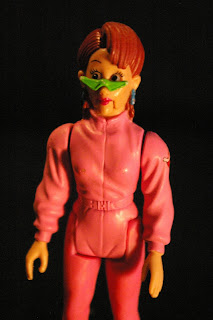 Janine Melnitz was the Ghostbusters' secretary in both the live-action movie and Real Ghostbusters cartoon. On one or two occasions in the cartoon she got to suit up with the boys and do some busting. While not screen accurate this figure represents Janine in a ghostbusting uniform. He cartoon outfit was more orange while her toy outfit is pink.

Janine features four main points of articulation at the shoulders and hips. When her right arm is raised it triggers an internal mechanism that activates her "Fight Feature".

Janine came with two accessories. Just like the rest of the Fright Features characters, she came with a ghost companion and a ghostbusting device. Her not-a-proton pack was a yellow gun with a comb end. I lost it years ago as a kid, so it is not pictured. 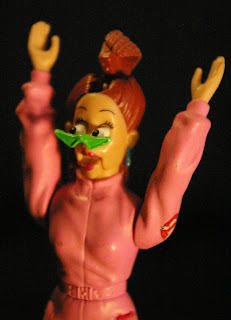 As mentioned before, when Janine's Fright Feature is activated her eyes (and glasses) pop out of her head. Her jaw drops and a section of her hair stands on end.

I never thought her features was the funniest or most extreme of all the figures from this series. It's cute, but her hair looks odd when it lifts up. She has a large void in her head.

The only real detailed paint apps on the figure are her blue earrings, fine eyebrows, and Ghostbusters Logo on her arm.

Even though Janine is dressed in her Ghostbusters cover-all I usually just had her sit around the Fire House and answer the phone.

Janine's little ghost companion/adversary is a chubby little purple ghost with gigantic lips. This goofy little ghost also has a tuft of rooted red hair. The packaging refers to this ghost as the Tickler Ghost. It's made of a translucent purple plastic and it's rooted air works with the comb like gun that came with Janine. 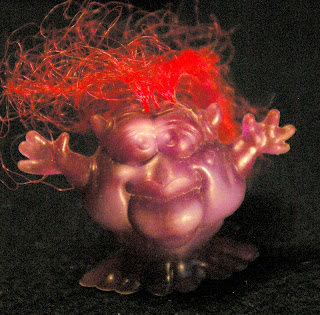