In the early 90's someone decided it would be great to market the womanizing super spy James Bond to kids. To help the kids relate they wanted Bond to also be a kid and so the cartoon and toys were called James Bond Jr. Now this new Bond isn't one of the James Bond Sr.'s illegitimate sons. Junior is really the original's nephew. I enjoyed the cartoon, but never got any of the toys. I was pretty focused on only collecting a few lines at the time. At Retro Con I saw several carded JBJ figures carded at one of the dealer's tables. He didn't have Junior, but he did have my favorite villain. I loved Jaws in the movies, so when he was in the cartoon he was instantly my favorite villain there also. 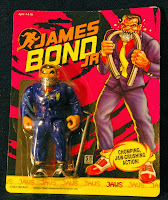 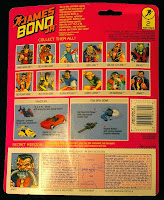 Jaws comes with a "metal" pipe with teeth marks in it. He has a built in action feature, "Chomping Jaw-Crushing Action". I plan to keep Jaws sealed, but it looks like if you squeeze his legs together raise his one arm (I've been corrected) the top of his head raises up and comes back down making the chomping action. His lower jaw is sculpted to his chest. It's sort of a backwards bite. 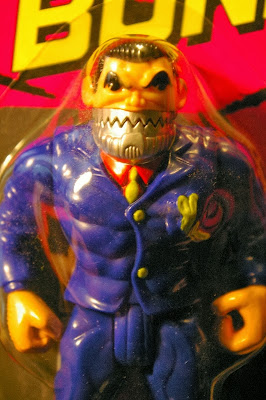