As a kid I always enjoyed the Gobots. Nothing against Transfomers, but I really liked the Gobots cartoon. I never had a lot of either toy line even though I watched both shows. The articulation always sucked on the toys and the scale was bad in both lines. These were the two big complaints I had about both sets of robot toys. 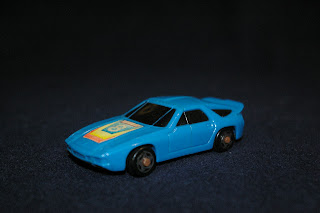 I got this toy carded at a store in the Richland Mall (a place that no longer really exists) as a kid. I thought he was a Gobot, but since I can't seem to find anything about his, I am starting to wonder if he is a knock-off. 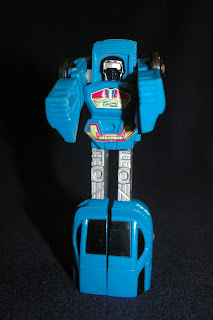 Here he is in robot form. I always wished 80's transforming robots had hip joints. It would have made them far more possible. This guy has knees based on how the truck hinges, but the knees don't do much without hips. This guy has been broken for about as long as I've had him. One time while transforming him his leg snapped off. I used to make my Hot Wheels get into accidents with him a lot since half of his truck would fall off. 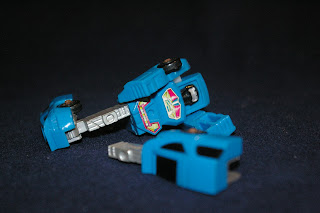 So, if anyone knows for sure if he is a Gobot or not please leave me a comments. Like I said, I think he is one, but sometimes you get weird impressions as a kid that you believe to be true later in life.
Posted by Buzz Chuck at 4:54 PM