2012 is the 30th Anniversary of Masters of the Universe. To honor this, Mattel has created a special sub-line to the MOTUClassics toy line. This 30th Ann. line features all new characters. The first figure was the Fearless Photog and was created by a kid back in 1987. His creation has finally been made in plastic form. The 2nd Figure is Draego-Man. He is an all new character created by the Four Horseman. The Horseman are the sculpting team that created the designs and sculpts for all the He-Man characters for the MOTU 200x and MOTUC line. If there is anyone who should get to create a new He-Man character, it should be them. In fact, I kind of wish they had let all four of them each design their own character. 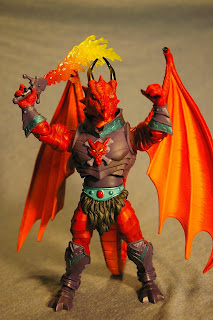 Draego-Man is a massive figure. He's tall and features a tail and wings. Just like pretty much all the other MOTU characters, Draego-Man has some shared parts. His arms and legs come from King Hsss and his tail is from Whiplash. His feet are shared with Hordak. There are already plans to use his wings for a future toy. Draego-Man comes with a flaming sword. He was originally showed to come with a flaming whip and a shield. Mattel had to drop some accessories because of how much the figure cost to produce. He has a ton of paint apps and lots of plastic with the wings and tail. They are going to try to release his other items later with another figure or in a weapons pack. 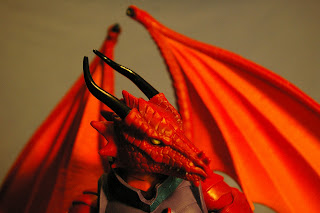 His armor is non-removable, unlike most MOTUC figures. His head sculpt is awesome.  There is so much shading on his wings. The Horseman have done an incredible job. Even the shared parts look like they were made for him. I like the red color, but I'd love to see what he'd look like in other colors also. I wonder what he'd look like in green or an icy blue. 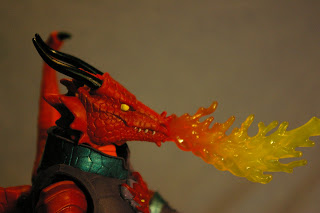 One last photo with his sword carefully balanced on his collar to make it look like he's breathing fire.
Posted by Buzz Chuck at 8:14 AM