I just got my GI Joe Collectors Club exclusive figure yesterday. This years figure is an awesome recreation of the 1985 Footloose figure. He has a great updated sculpt and modern accessories. His paint job is incredible. The camouflage pattern from his original release has been perfectly recreated here. 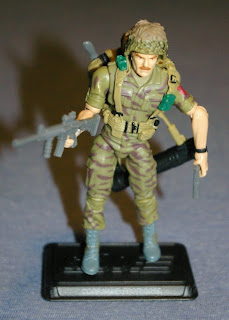 He uses some parts that the Collectors Club has sculpted for last years Con Exclusive, Claymore figure. This makes perfect sense due to the fact that the original Claymore reused Footloose's head and helmet. I always loved his original helmet with the leave painted brown on top. I even painted the vintage helmet that came with the weapons pack so that it had green leaves since that helmet came in brown. 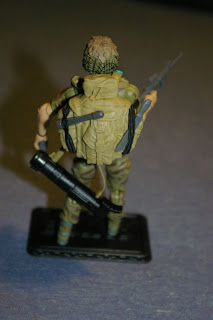 I really like the elastic strap on his modern backpack, It's a cool feature. I have his knife and missile strapped to the pack in this photo. He also has a flashlight that fits into a molded compartments on the inside of the backpack.

There were some credit card issues with the club this year, so I think a lot of people might have missed out on this guys. It's a shame because he's awesome.

We used the vintage figure of him in our stop motion animated series, Action Figure Adventures. He has a smaller roll, but it humorous. Hopefully the final tweaks will be made to the series soon and we can upload it so everyone can see it. The vintage figure is also featured in the 6th episode of Animation Creation.
Posted by Buzz Chuck at 7:29 PM