I am not a completest when it comes to the Marvel Universe figures, but I do pick up characters I like from time to time. I enjoy the fact that they are 3.75 inches tall like GI Joes (another Hasbro toy).  Most of the MU figures I have are X-Men characters. I got my first Storm (pictured right) in the Giant Sized X-Men #1 box set. Unfortunately she kind of sucks. So when they released a new but similar version (left), I picked her up. 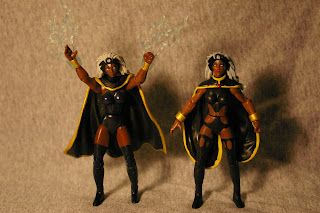 The new version is superior to boxed set version because she can move her arms. The first one has her cape attached to her wrists. This is comic accurate, but sucks for a toy without a cloth cape. I originally thought about some how cutting her cape from the wrist guards. 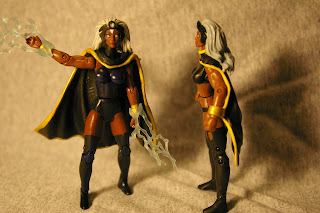 They have the same head sculpt and share parts with almost all the other female characters because the female buck is very plan and works well for most comic characters. Some of these figures only have painted on details, they remind me of the old Marvel Secret Wars toys. There is also an 80's punk Storm in the line. My preferred costume is the black or silver costume from the 90's with the giant lightning bolt on her chest. i kind of doubt I'll be buying another Storm figure even if they do release her in that outfit. 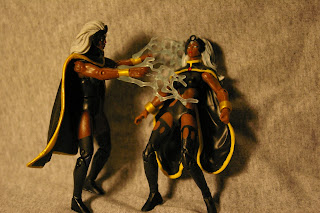