I love the new Thundercats cartoon. It is really well done. Nice visuals, based on the old series, but plenty of new story. I've been collecting a lot of the modern Thundercats toys that Bandi has put out. The most recent wave has been really hard to find. Many stores have their pegs full of the original Lion-O and Mumm-Ra. Plus they have a million Thunder Tanks they can't sell. This has resulted in not restocking and clearance prices. I'm going to be pissed if this cartoon gets killed off because Bandai can't run a good toy line. 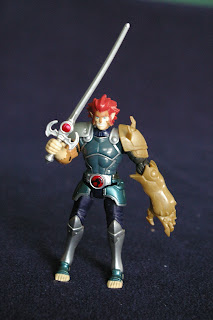 Of the new wave, Lion-O 2.0 (as I call him) is the only figure I can find. This Lion-O is pretty much just like the other one, except for his left arm. This arm features a bigger and badder claw shield. As the story goes on in the cartoon Lion-O gain power and armor by collecting stone that get placed into the surface of the shield. In a flash back we learn that his ancestors had a huge mech-like suit of armor when they had all the stones. I just hope we make it long enough in the cartoon to see Lion-O with it.

The figure has decent articulation. He features a Thunder-Lynx magnet in his back. This is a really crappy action feature that activates sounds and weapons on the vehicles and play sets. He comes with a normal left hand, the claw shield, a long Sword of Omens, and a dagger Sword of Omens.
Posted by Buzz Chuck at 6:04 PM