We are getting close to May's sale date on Matty Collector.com and I still haven't talked about everyone I picked up in April. Man-E-Faces is another vintage character painstakingly modernized into Classics. I never had Man-E as a kid. I also had a major misconception about him growing up that made me not like him. Since I didn't have the vintage figure I didn't read his mini-comic. I for some reason thought the faces were disguises. It seemed pointless to change your face with that crazy armor and helmet. People would still know who you are. 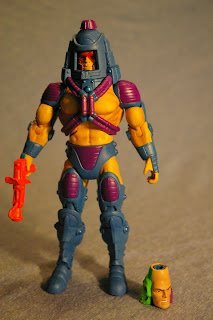 If I had read the comic or seen his episode of the Filmation cartoon, I would have known he was a great actor who was magically cursed with these three modes (characters) he could change between. Each form giving him a different sent of abilities.This is a much better back story and makes the different faces serve a better purpose. I still don't really love him... actor turned warrior... I'm not so sure.

The figure looks great and features a turning head to reveal his 3 faces just like the vintage toy. You can also swap that set of faces out for another set. The original set features his human, robotic, and monster faces. The second (new) head features He-Man, Skeletor, and Orko. 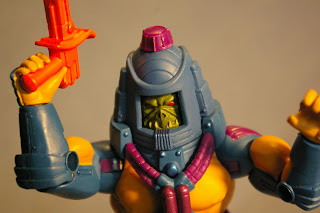 Man-E-Faces also comes with a perfect recreation of his vintage blaster. The sculpt on his monster face is awesome. I just love it. The draw back to monster mode for Man-E is that Beastman can use his power to control him. 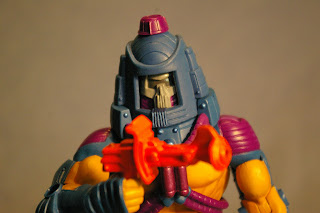 In his robotic mode Man-E can access sensors to help him track enemies and what not. He's a great figure, but like I said... I'm not a fan of the character. I passed him up once before, but since I was ordering stuff this month and because most fans consider him a must have, I decided to pick him up.
Posted by Buzz Chuck at 3:21 PM