Well, I needed to finish posting the MOTUC figures I picked up in April, and King Hsss was left.This guy is the leader of the Snakemen, and evil faction invented about 3/4 of the way through the vintage toy line to help invigorate sales. I'm not a huge Snakemen fan. I had Tongue Lasher as a kid and just used him as one of Skeletor's men. I did have the vintage King Hsss, but I bought him at a yard sale years after I had parted with my original MOTU collection. (I'm not sure what happened to him... may have sold him at a yard sale.)

Hsss looks like a human wearing snake themed armor (kind of like Serpentor from GI Joe), but as it turns out he can shed his skin to reveal his inner snake. The vintage toy could literally shed his skin because the human body was made of two plastic halves that covered his snake body along with "sleeves" to cover his snake arms. The Classics version has two interchangeable torsos. 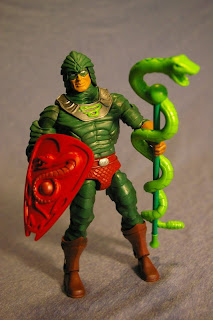 Like the vintage figure he comes with a shield and a staff. He's kind of a weird bad guy. What is the advantage of being able to look like a human? Hsss was never in the Filmation cartoon, but played a big role in the later part of the MYP (200x) series. It seems from what little of the storyline that has been revealed, King Hsss would have remained an important character in the season that was never produced. Man-at-Arms would have been making weapons for his army which would be an interesting story, and an upcoming figure.

Hsss's other torso is made of a bendy material with wires inside so he can be posed. It's kind of cool, although I worry it will wear out one day and the wires will pop out of the plastic. His main snake mouth even has a cool articulation joint.  The human torso does have backwards shoulders which is a problem that has plagued MOTUC from time to time.

I originally passed on King Hsss, but went back and picked him up because later this year I will be getting the Snakemen army builder two-pack as part of my subscription. It is also pretty obvious that they will be releasing some of the other snakemen in the future because the army pack paid for the tooling they need to make several snakemen characters. I wouldn't mind if they never get around to Snakeface. He's one of my least favorite MOTU characters ever.
Posted by Buzz Chuck at 10:51 PM