Count Marzo was a reissue figure last month, and I'm glad I added him to my collection. Marzo was a character in both the Filmation and 200x He-Man cartoon series. This figure is based on his 200x appearances. He has longer hair in 200x (like many characters) but otherwise his face is similar. His outfit is very different between the two shows. 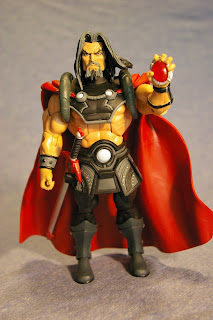 The count features a special hand (which has now been used on at least one other figure) that allows his to hold his magical amulet. This accessory is so important to the 200x storyline that features him. He has very interesting armor that is unique to him. No furry loin cloth for this sorcerer. Count Marzo is the most manga/200x styled of all the classics figures. Scott from Mattel even mentioned that management sort of said no more of that in the classics line after he came out. 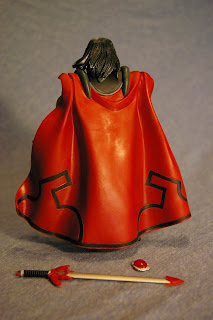 Here is a shot of the back of Count Marzo. He has kind of a cool design on his cape. His sword can clip to his hip as pictured in the first photo. There is also a spot on his belt behind the cape where you can clip his amulet. Count Marzo is a nice figure, but not really a must have character. I like him in the cartoon, smaller villains that break up the main story to help make it fell like Skeletor doesn't loose all the time. Wouldn't it get old if everyday Skeletor came up with a plan, attempted it, and failed?
Posted by Buzz Chuck at 6:22 PM