I hope everyone had a good Free Comic Book Day Weekend. I had planned to make it to the New Jersey Collectors Convention (NJCC) this weekend, but I recently ran into transportation issues that are going to keep me from getting out so much. So no flea markets or NJCC this weekend. I did manage to get to my favorite comic store and to the movies on Saturday. 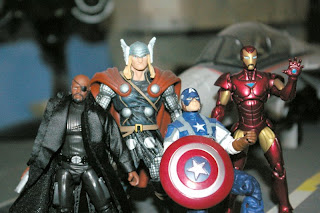 I figured today's post should feature the Avengers. In honor of Free Comic Book Day and the release of Marvel's Avengers.  I haven't picked up any of the Avenger's movie line figures. I looked at a couple including the Hulk and their jet. I don't know, movie lines tend to be overly gimmicky because they aim them at kids. Pictured above from left to right: Nick Fury, Thor, Captain America, and Iron Man. I thought the movie was really good. I love the Marvel movies, but I'm not a huge Avengers fan. I think it is hard to come up with good stories that require all the different heroes considering the fact that they take on all kinds of villains on their own usually. 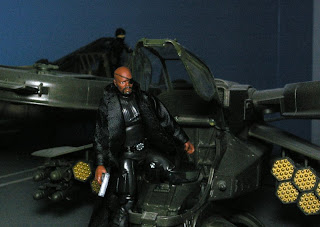 First up is Nick Fury. This figure came in the Iron Man 2: Fury of Combat 4 pack. He features a cloth trench coat and a great likeness to Sam Jackson. I think Hasbro reused some parts of the 25h Ann. GI Joes for his body. This is probably the best Nick Fury out there. He looks good and the cloth trench coat doesn't interfere with his movement. The vehicle he's getting into is from James Cameron's Avatar. I picked it up on clearance because it looks pretty cool. 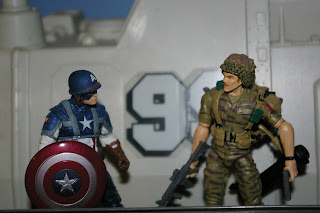 Cap is giving out orders to fellow solders on board the S.H.I.E.L.D. Helicarrier. This particular Captain America figure is from the Captain America movie line. He features a removable helmet (with normal mask under). Some webgear, pistol, and of course his shield. I looked at a lot of different Cap figures from the movie line before I settled on him. I believe he is know as "Super Combat Captain America". 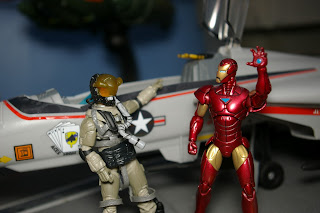 Iron Man shooting the breeze with a fighter pilot. This Iron Man came from the Marvel Universe toy line. I actually bought his because he had a second head that showed Tony Stark with a hood type thing on. He looks cool with that head on and the helmet under his arm. I'm not sure what the proper name is for this suit of armor. After Mark 1, I'm not sure which is which. 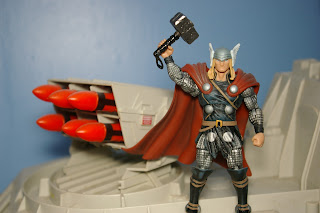 The Might Thor with his hammer calls on the power of thunder. This is another Marvel Universe figure. I picked him up around the time the Thor movie came out. I like the modern comic look more than the older version. I went back and forth a few times between this figure and a movie figure without his helmet. 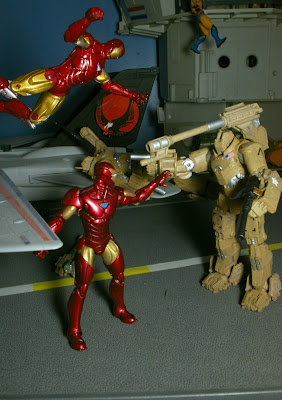 Here is the Marvel Universe Tony Stark/Iron Man and the Fury of Combat Iron Man figure battling the Drones that also came in the 4 pack. They two Iron Man figure have different versions of the armor. The most noticeable differences are the shoulder pads and the thigh armor. The Tony Stark Iron Man is a superior figure in my opinion. Better color and paint, but a less movie accurate sculpt.

I love the way they have applied a Japanese mech style to the Iron Man armor for the movies. He seems so much more real now. The old comic armor always seemed ridiculous to me. It had no joints or seams and was form fitting. The movies have really made me start to like Iron Man as a Marvel superhero.