Tygra, the Thundercats second fiddle. He's not the kings, because he is adopted. I wonder if adopted people were offended by that episode of the new Thundercats cartoon like they apparently are about the joke in the Avengers movie. In the classic cartoon Tygra used only a whip for a weapon. This whip could shoot fireballs and make him turn invisible. For the newer show they have given him a blaster that he steals soon after the Thundercats learn about technology. 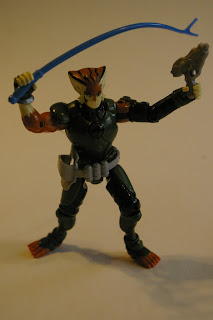 This Tygra figure is pretty decent. He's got good articulation and decent paint. His sculpt is not super detailed, but nice. He has a belt and holster which can hold his blaster. The gun is a little over sized. Perhaps due to safety standard. I'm not sure. The whip is pretty cool. It's very flexible which works nicely. You have some possibility options and it sits pretty naturally in a "in use" kind of pose. 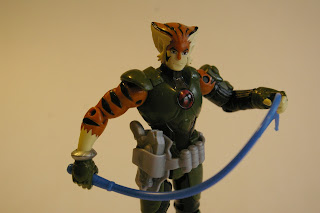 I wish Bandi didn't give these figures such a shiny finish. It looks a little cheap. I also would like to see a little more fur texture in the sculpt. I know they are based on a cartoon, but just a little texture would be nice.
Posted by Buzz Chuck at 9:49 PM