Derek tells me we are very close to being able to upload Action Figure Adventures: the series. I wanted to try to slip in one more sneak peak at the credits to the show. This stop motion animated series utilizes over 50 different action figures who have speaking parts and a whole bunch more who don't have lines. The voice actors for the speaking characters are represented in the credits as Colorforms.(Those vinyl stick and reuse window cling toys that were popular in the early 80's) 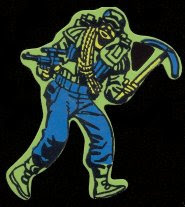 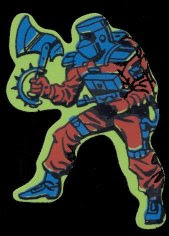 Barbeque and Alpine come from the 1985 GI Joe Deluxe Colorform Set. Barbeque is a main character in the series while Alpine has a short but important role. 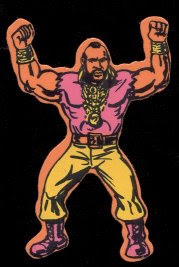 Chuckles, another GI Joe, has an important role is a subplot to the main series. His colorform was created by Photoshopping his appearance in the Marvel Comic series. I had to track down a 70's A-Team Colorform set to get this Mr. T character. 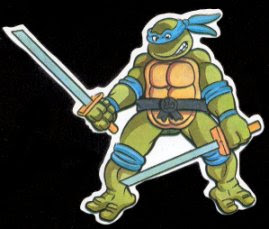 Leonardo, the only TMNT character is the series comes from the Deluxe Ninja Turtles colorform. Leo, Lady Jaye, and Footloose  ( both from GI Joe) are involved in the same episode.

Cobra Commander is really a Photoshopped Cobra Solder. He and Storm Shadow are both from the 1985 Colorform Set.

Scarlett and Outback are both taken from Marvel Comic art. Clutch is from the 1982 GI Joe Colorform. I Photoshopped on the beard to help him match is toy a little better.

Sgt Slaugter who is one of my favorite supporting characters in the series is modified from a Marvel Comic appearance and Snake-Eys came from the 1982 GI Joe Colorform. Like Clutch's details Snake-Eyes was originally blue, but I made him dark grey to better match the black 1997 Snake-Eyes figure used in the show.

Like I said... hopefully the show will be available online very soon.