The Masters of the Universe Classics line is an adult collector toy line. They release a new figure each month. They also often times reissue older figures to let fans new to the line catch up. I was so happy this month that they were reissuing Orko. I have been wanting to get this pack since I started collecting the line. (I actually avoided MOTUC when I first found out about it because I couldn't get the main characters at the time. Then I bought a bunch of figures when they did a massive reissue of main figures.)

Orko is a weird little alien magician that floats in the air and keeps his face covered. He serves as the comic relief in the cartoon and is an important character in two capacities. Orko is important because he is in every episode, and also because he is one of the few characters who knows He-Man's true identity. 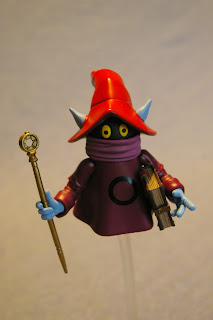 The modern figure comes with a magic wand and spell book. He is more appropriately scaled to the other characters, and has better articulation than his vintage figure. He also features a clear flying stand that makes him hover at normal height to the other characters. I never had the vintage Orko, but I loved playing with him a friends houses. Unlike the vintage figure his hat is not removable. 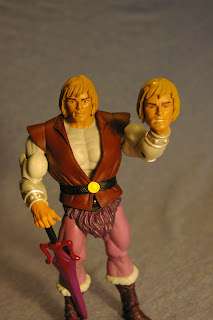 The real reason I wanted this pack like crazy was because it included a fully articulated Prince Adam Figure. Prince Adam was one of my favorite MOTU figures I had as a kid. To me the coolest part of the show was the transformation. I always like the secret identity character and having the hero change. I always wanted Clark Kent and Bruce Wayne figures as a kid. The only one I had was Prince Adam. They packing in a Power Sword and a half Power Sword as well as a "He-Man" head  and a more casual head. To be true to his vintage figure he needs the He-Man head and half Power Sword. The full swords are much nicer and look better on display and the casual or smirking head looks nice to give Adam a slightly different look from He-Man. 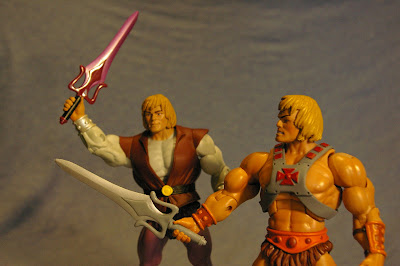 Adam: What's the matter with you?

He-Man: It's bad enough you wear purple tights,  but that sword is a joke.

Adam: Why don't you go find a shirt to wear? 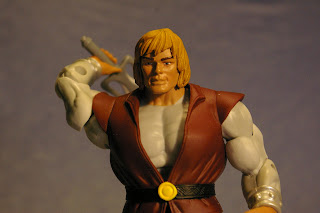 By the Power of Greyskull! As a kid I had a role-playing  He-Man Power Sword. I loved it and would run around the yard with it stuck down the back of my t-shirt. Then at the first sign of "trouble", I'd pull it out and yell those magic words. I have a very vivid memory of running into the rows of corn in our garden one summer to change into He-Man. I had to hide before I'd transform just like Adam in the cartoon. 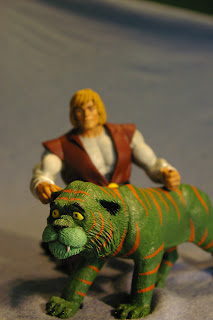 Here is a picture of Adam with the Cringer figure that was packed in with Queen Marlana. Another figure I always wanted as a kid. I took the armor off my Battle Cat all the time as a kid to turn him into Cringer, but he still looked ferocious. I even picked up a spare Battle Cat at a yard sale as a kid that was missing his armor so I wouldn't have to remove it to change him between the two characters. I hope they eventually make a bigger (older) Cringer toy for MOTUC. 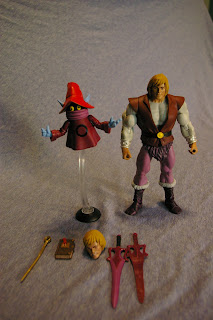 One last shot of the entire pack. The Orko figure is great. I really like him. He's pretty much perfect. The only complaint I've heard about Adam is the fact that he doesn't have a slot on his back for the sword. I'm okay without it. In the toon he magically pulled it out from behind his back. You could never see it on his person as Adam.