I recently posted about the Lion-O figure from the 2nd wave of  modern Thundercats toys. I did some digging around to find my Lion-O from the 1st wave. They did a nice job on this guy. He has the same issues as all the toys from the 4" modern line. They are very shiny and don't have a ton of detail, but they look pretty much like they do in the cartoon.

Lion-O comes with a short and long version of the Sword of Omens. He also comes with the Claw Shield which he can wear on his arm and holster the short sword. Lion-O has nice articulation, other than that his shoulder armor hurts his movement. It keeps him from being able to raise his sword above his head. 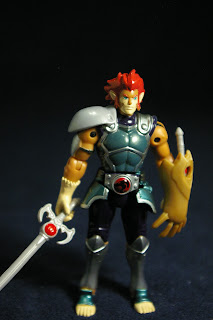 His arms do not allow him to pull the Sword of Omens from the Claw Shield while he wears it. Although this would require pretty impressive articulation on a 4" figure.   I think it's pretty cool that in the recent episodes of the cartoon they have explained why the sword is so small and grows to a larger size. 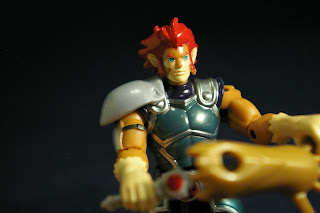 Here you can see how the Claw Shield clips onto his arm. Unlike many of the other Lion-O figures released by Bandai, (Like version 2.0 - as I call him) this shield clips to his hand instead of being interchangeable. It works okay, and was good enough for the vintage figure. 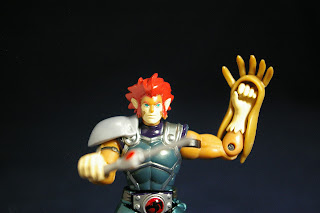 This photo allows you to see the difference between version 1.0 and 2.0. It's kind of a shame that the shoulder joint is the wrong color on 1.0, although I know that this happens a lot with toys. If you look closely you will also see they have different head sculpts. Lion-O 2.0 has more of an angry face, new shoulder armor, and his claw shield is an interchangeable piece and  he comes with a plain hand. 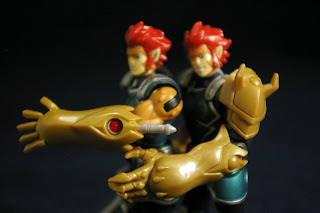 Of course Lion-O 1.0 also has the Thunder Lynx magnet in his back to activate sound and stuff on other toys. The Sword of Omens is very soft, so be careful if you store this figure loose so it doesn't warp. There is a small bump on his hip armor, but I had no luck trying to get the Claw Shield to cling to it. I'm not sure if it might be stretched out from being on his hand for months since I got this figure. 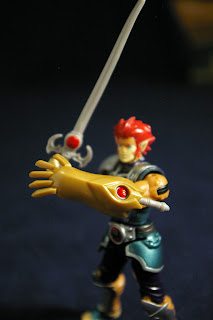