By the power of Greyskull, I have an awesome beach towel! I have had this towel for as long as I can remember. It's marked 1985 on the edge. It features some interesting art. It is very rare that we see Battle Cat without his helmet. It is also interesting to note that Skeletor's outfit is red. I think it is safe to assume that they were limiting the number of colors used in the art and that's probably the reason for the costume change. 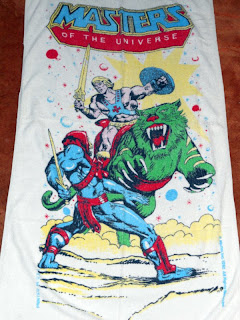 I have a very vivid memory of telling one of my family members, as a kid, that my towel say He-Man at the top. I was very proud of myself for being able to "read". My cousin or Uncle replied, "actually it say Masters of the Universe". So in '85 that logo meant He-Man to me. They didn't stress the Masters aspect in the 80's. It was rare for them to call anyone a Master of the Universe in the cartoon and all the figures were labeled as Heroic or Evil Warriors. They could have easily called them Heroic Master of... instead. 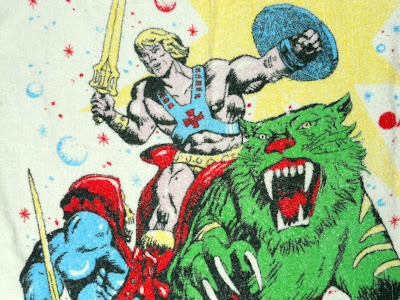 Here is a close up of the details. I did get MOTUC Stinkor and Slush Head in the mail today. I'm not sure if I am going to take photos of them and blog about them as usual or if I'll shot a little video for both. I wanted to do some videos for on here... but hadn't really gotten around to it.

Let me know in the comments if you prefer one format or the other.
Posted by Buzz Chuck at 9:07 PM