Half man and half crab... and all bad attitude. He's Clawful the evil warrior! I never had Clawful as a kid, but I have some very vivid memories of playing with him at a neighbor's house. The girl up the street was in my kindergarten class, and I loved going to her house to play because all her older brother's He-Man figures were stored in a collector's case in the family play room. I specifically remember an adventure I played out where Clawful was married to Barbie (and I'm talking about the famous original Barbie, which was from the neighbor girl's mother's childhood). Each day he'd go off to work to battle He-Man and then come home to his wife for dinner. 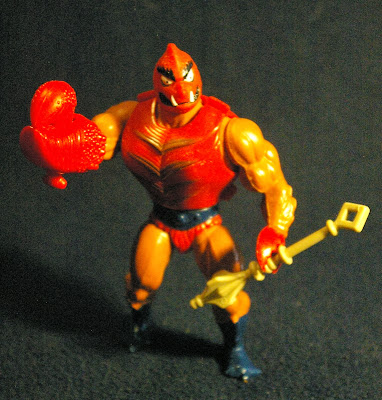 Clawful shares his legs with Skeletor and his one arm with Buzz-Off. His head, armor, and big claw arm are unique to him. He also came with a green mace that is identical to the gray one from Castle Grayskull and brown one from Moss Man. Clawful's armor is some of the most detailed armor in the line. Clawful's big action feature is his large pinching hand. The hand is spring loaded and snaps shut once opened by the little button on the bottom. 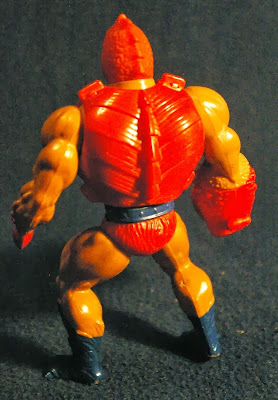