The line of Uncanny X-Men toys made by Toy Biz in 1991 is what made me an X-Men fan. The 90's Cartoon and Comics both helped me become more knowledgeable and fully emerged in the world of X-Men. The first wave of figures all came with a trading card that matched the figure in the package. Between the text on the package and the trading card inside it help make me know the character I just got in plastic form. Later waves often came with random trading cards. Of the first wave of X-Men figures Wolverine was one of the coolest. In honor of the new movie, "The Wolverine", I decided to post about him. 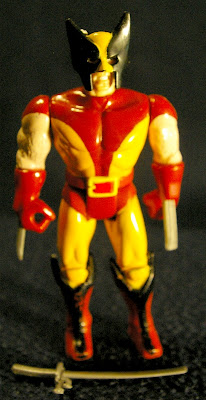 This figure represented Wolverine in his brown and orange costume, which he was wearing in the comics at the time. He had seven points of articulation. Many of the characters from this wave had two more joints, but Wolverine (and a few other characters) did not have elbow joints for various reasons. Wolverine didn't have elbows because the articulation would have interfered with his action feature.

Wolverine's mutant action feature was his "pop-out" claws. He had spring loaded claws that would pop out of his writs with the slightest tap of a tab under his arm. This feature also worked to make it look like he could really stab things. When his claws come in contact with any surface they would start to slide back insides his arms making it look like they had cut into the surface. It's fun to have him stab other action figures.

For accessories Wolverine came with a removable mask as well as a samurai sword. He can only hold the sword with one of his hands because the other was sculpted as a fist. His mask is pretty weak looking and I almost never had him wear it as a kid. The mask could also be used a ring thagt you could wear (lame feature for boys - seems like a She-Ra toy line feature). 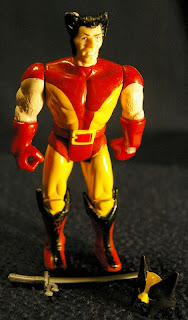 Logan's (Wolverine's) face  sculpt is okay. He looks pissed, but his face is slightly awkward. Even thought I don't 100% love his face sculpt it looks better than that goofy ring mask on his face. His claw placement is a little off, but this is due to the action feature. His claws look like they come out of his wrist instead of his knuckles.

The sculptors did a pretty nice job of translating his unusual boots into plastic while still allowing him to have articulated knees. You can see there is some paint wear on his boots, he's seen a lot of play time. For 1991 this really was an awesome figure. Tons of play value and I put a lot of miles on this figure. When I streamlined my toy collection in middle school Wolverine and Magneto were the only two figures from the line I didn't offer up to the yard sale gods. He was just to cool of a character and the first figure I ever had of him to sell off. At the time of Secret Wars I really didn't know who any of the X-Men were. I didn't own that figure at the time. 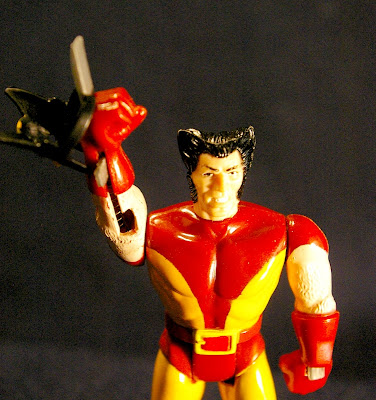 Wolverine's claws work using a similar "J-Channel" or "L-Channel" to the Rocket Fire Boba Fett prototypes. I flicked the little tab on the back of his arms to pop his claws thousands of times in the 90's and they still work great today. My buddy Tony (aka ActionFig) from Action Figs and Things sent me a loose version of this figure in a package of toys one time. That Wolverine has better paint than mine, but his one claw doesn't stay in real well. He hangs out on a shelf in my living room full of toys that I play with along with my niece.
Posted by Buzz Chuck at 10:31 PM