This is the second version of Wolverine released in the Uncanny X-Men line by Toy Biz. This time he is suited up in his blue and yellow get up. His claws don't retract and stay in, they just sort of slide in and out to make it look like he's stabbing something. This version of Wolverine does not have a removable mask, but this helps give him a better appearance. 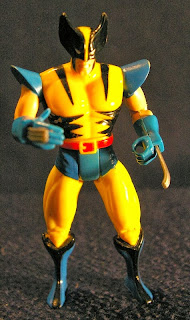 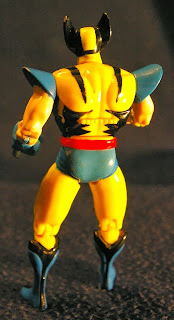 The only accessory this version came with was a small black gun (not pictures). Why he came with a gun? I really don't know. I bought my figure at a yard sale without his gun years ago. I used him in my stop motion animated show, Action Figure Adventures. He didn't play a very big part, but if you want to check it out there is a tab on the side for that series.

I still remember the first time I saw this figure was the night of the Christmas Program at my Elementary School in 5th grade. My buddy Paul had him in his pocket and played with him before it was our classes turn to go on and sing our song or whatever. Paul played Santa Claus in the Christmas Program in 1st grade. I was his head toy making elf.
Posted by Buzz Chuck at 6:50 PM