Comic Book Men after the Oscars 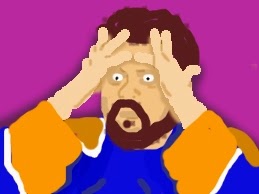 As usual this episode starts with all the Comic Book Men making fun of Ming. Tonight's topic had to do with costumes in the bedroom.

The first customer to come into the Secret Stash for this episode wanted to buy the first appearance of the Hobgoblin. The girl didn't want to pay full price so she worked out a deal to pay $60 and two mystery boxes. One was a yellow Batman box and the other was a purple Batman box. After Walt agreed to the sale he opened the boxes up to find a Christian Bale Batman figure, and a Catwoman figure inside. He wasn't impressed.

The next bit of comic shop banter came in the form of why can't they build a prison to hold the super villains ? Of course if the villains stayed in prison there would be no new adventures for the heroes or the writers would have to continue to design new villains.

The next customer brought in some vintage 1982 Game and Watch Nintendo hand held games. These early games which are similar to Gameboy or the old Tiger Handheld games are pretty rare now. Walt had to turn the guy down. They are a comic store, not a video game shop.

Kevin Smith shared a funny story about how his family acquired an Atari 2600. Basically his Dad bought a console from an ad in the paper. The Dad selling  the Atari was doing it to punish his own children.

Instead of having a guest on this episode, the boys from the Secret Stash went up against each other in a trivia contest. Mike and Ming were given decent questions, but Bryan was handed all softball questions. Mike did well, but Ming was buried by the competition. I watch Comic Book Men because I like comics. I had more fun listening to these guy try to answer trivia questions than seeing a C or D-List star come to the shop.

The final customer on the episode brought in a prop replica of Hellboy's gun, The Samaritan. The guys discussed other famous movie guns, but I think because they are comic fans they were biased to place the Samaritan high on the list. The Hellboy movies were good, but I don't know if people really remember them close to 10 years later.