The End of the "Little Plastic" Series

Hey, I finally made it through my big barrel of little plastic men. I hope nobody got to bored of the lack of variety here at Action Figure Adventures. I promise to hit some other toy lines again now that this series is wrapped up. I just wanted to hit this topic hard to get it out of the way.

First up today are some 1950's Baseball Players that came as a promotion through Nabisco Cereals. These figures belonged to my Uncle when he was a kid. I'm pretty sure there were more of these when I had them as a kid. the rest must be around somewhere in my parents basement. You can see in the photo, the catcher, umpire, and flanking each side is a fielder. I only have blue players, but there were also yellow ones available. There is some debate as to if these figure were produced by LIDO.

These animals were also my Uncle's as a kid. They may or not all be from the same set. The pig features a "hollow belly", which was seen in farm animals produced by a couple of companies to save on plastic. There was a hollow belly sheep in this set originally as well.

The three Indians (Native Americans) pictured above are also from the same time period. In fact, the two figures with bases have "WB" written on the bottom of them. This of course stands for my Uncle's name, Walter Bishop. The third Indian has a bow-legged stance for riding on a horse. The Cowboy below may be from the same set, but I'm not sure. He doesn't have my Uncle's initials on his base, but seems old and matches the color of the Indians. The Cowboy's base is very smooth, while the Indians feature some sculpted details. 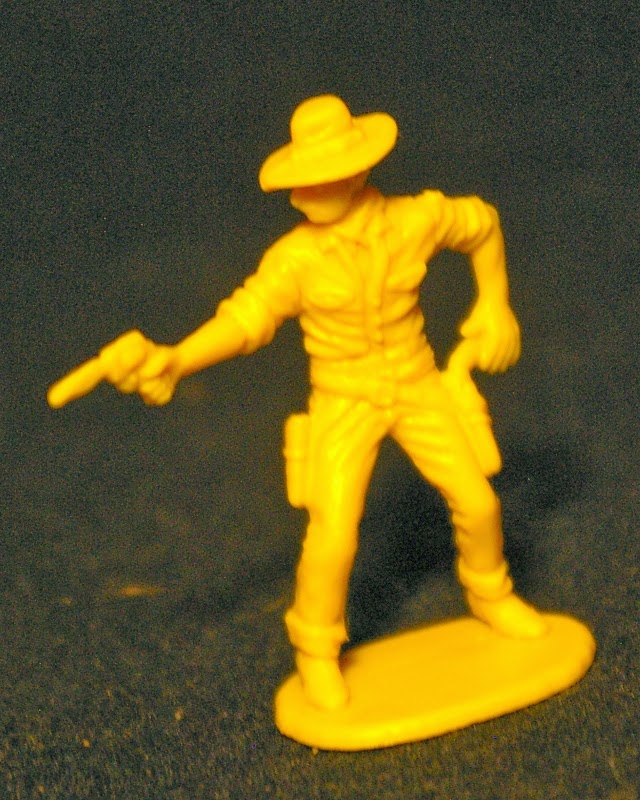 The main focus of this blog is action figures, but I did set it up to showcase my stop motion animated show Action Figure Adventures (the series) see the link under tags.         ---------------->
Anyway, all these posts about little plastic men remind me of one of my favorite stop motion animated movies which is all made using little plastic people. The main characters are Cowboy, Indian, and Horse. The film, which is based on a tv show is call "A Town Called Panic". The people behind the show have a collection of thousands of little plastic figures. They take tons and tons of similar figures and modify them to be in every pose they need out of a character and then give them a quick paint job to make them look like an identical figure. Then though the process of replacement animation they create an action packed story by swapping little plastic figures each frame. Check out the trailer below.