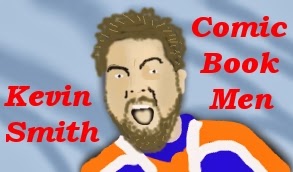 In true Comic Book Men fashion, again this week started with making fun of Ming. Mike Z. also took a little ragging based on one of his favorite pop culture robots.

Comic inker, Mike Esposito's nephew brought in some original artwork by Mike. Walt called in "pop culture expert" Rob Bruce to take a look at the art. They decided the best thing to do with the art, which was reproductions of work he had previously inked for comics, is to take it to an auction house. Walt and Ming agreed to help Mike Esposito's wife auction the art.

The next main segment showed off the Loki Hot Toys figure based off his modern movie appearance.I have to admit that the Hot Toys look incredible, but they just aren't what I'm into. Like the 12" GI Joes, I can appreciate all the details in their uniforms, but I don't really need all those cloth clothing on my action figures.

I though it was interesting that Kevin Smith mentioned his favorite villain is Darkseid. I just would have expected it to be a Batman villain. Although Kev did mention a Batman connection with the character. Smith likes Harley Quinn so much he named his daughter after her.

The main segment of the episode focused on the Mike Esposito auction. The art work looked great. Some of them were based on some really classic pieces. I really liked the recreation of the panel in which Peter Parker meets Mary Jane Watson. At the end of the episode Walt called Mrs. Espositio to tell her that the art sold for over $21,800. I loved the fact that Kevin Smith made fun of the fact that Rob Bruce estimated that the stuff might sell for around three grand. Some "expert".
Posted by Buzz Chuck at 12:33 AM