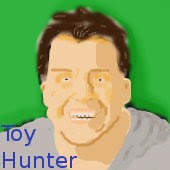 So this week Comic Book Men went without a celebrity guest, but Toy Hunter had Taboo from the Black Eyed Peas. He and Jordan walked around a giant toy show looking for LJN Wrestlers. Taboo looked at a lot of toys based on real people or actors. Rock and Apollo, OJ Simpson, and Hulk Hogan.

Jordan picked up a Shogun warrior figure, but then he was off to meet up with his buddy Steve to look for more Wrestlers.

The first person they visited was a woman whose husband had worked for Hasbro. They dug in her attic where they found My Little Pony, and an Oscar Mayer peddle car. Next Jordan found a Japanese Beast Wars Megatron. This was a chromed version of the T-Rex Megatron. A "Lucky Draw" figure, which was given away as a promotion. The home owner was a tough negotiator, but I'm got she got some real cash for her late Husband's toys.

They moved on to another collector's house. This place was Wrestle Mania (ha ha). They home owner had a huge toy collection, and it was all Wrestlers.Jordan was trying to find some carded LJN Wrestlers for Taboo. He picked up a Macho Man Randy Savage.

Finally they headed off to meet up with Hulk Hogan. At the Hogan Beach Shop they found a Hulk Hogan Workout Set. Hulk showed up and reviled an even better toy. He had a rarer final year of the LJN WWF Super Stars Hulk Hogan figure, which was actually released by Grand Toys.

Of all the celebrity guests they've had on Toy Hunter, Taboo was the best. Since he was a true toy collector the episode didn't seem forced like many of  them do.