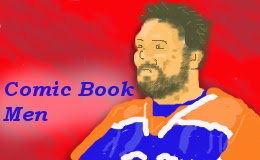 This weeks episode started off by making fun of the Marvel superhero Starfox. There was of course a light jab at Ming for good measure.

The first time they cut away to Kevin Smith and the gang, they were all taking about the various vehicles that have been to the Secret Stash including the 66' Batmobile and General Lee. This of course was a lead=in to the fact that someone recently came by the shop with a '66 Batcycle with sidecar they were trying to sell. The Stash wasn't able to offer the guys money for the cycle, but they asked if they could go for a ride.

The shots of Walt, Ming, Bryan, and Mike taking turns ridding the cycle all kind of looked like a bad green screen job. At the end of the segment you could briefly see the they were sitting on the motorcycle while it was trailered. So, all the riding shots were staged, but not green screened.

Later in the episode a customer brought in a 70's board game featuring Marvel Comic characters. The Amazing Spider-Man & Fantastic Four board game is a pretty simple tie-in product that could have probably been used for any licensed property. There was very little marvel art other than on the box to the game. Walt said he had it as a kid. Walt, Bryan, Ming, and the customer played the game.

During one of the quick segments Kevin Smith had comic artist Greg Capullo on CBM. Greg said the first thing he draws is the neck when he starts Batman. Greg also said that Alfred and Jim Gordan are two of his favorite supporting characters to draw.

The next customer brought in a pristine copy of FOOM Magazine. In the 70's people could subscribe to FOOM if they wanted to get the behind the scenes and inside scoop on comics that we get online today. FOOM stood for Friends of Ol' Marvel. I had not heard of FOOM before, but as a kid I occasionally read Marvel Age, a different publication which served the same purpose. It was pretty cool to see, because the guy had the Hulk envelop the magazine came with along with the poster, stickers, membership card, and other little items.

The boys had a quick conversation about the lame super powers Superman has been shown to have from time to time. They complained about the plastic wrap "S" symbol from Superman 2 and well as other tricks.

The final customer to come into the shop wanted to sell a Back to the Future "OUTATIME" license plate singed by Doc Brown actor Christoper Loyd. The customer wanted an outrageous price , and since the stash doesn't specialize in movie items, Walt had to pass. Considering it's not hard to find the Outatime license plates online and that Christoper Loyd still does conventions this item probably, while is very cool, is not that rare.
Posted by Buzz Chuck at 7:52 PM