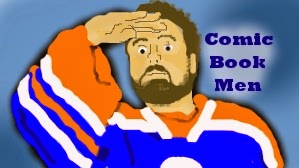 This episode started off with a debate over the ending of the War of the Worlds movie. They didn't really specify which version they were talking about.

Kevin Smith wastes no time asking what the best thing to walk into the Secret Stash was. Walt starts drooling over some silver age comics. They showed off some amazing books. Walt suggested that the guy get the best of the books graded. The guy really didn't know what he had, so Walt agreed to call in a buddy of his to pick through the collection and identify which books the guy should invent in having graded.

The next customer brought in the terrible TurboMan figure from Jingle All the Way. Jake Loyd, who would later play a young Anakin Skywalker was the main kid in the film. It's not a great film, and the figure sucked as well.

The next customer brought in some sports memorabilia. Wayne Gretzky items. Walt really wanted to buy the collector plates and figures for Kevin, since he's such a huge hockey fan.

The episode wrapped up with the expert comic book grader stopping by the Stash. This segment felt a little like it was just an ad for CGC. I understand grading stuff so you know the condition, but it's a comic. If you can't open it what's the point. Once they grade them they are sealed in a plastic slab.

Not the best and not the worst episode. I did enjoy seeing the really old comics. I don't really care about the sports stuff, and the one toy in the episode was crappy.